In my next life I'm gonna come back as a ferret!

Not very glamorous I know but it seems to be my nature to be able to "ferret" things/solutions out! I don't know if you know her, but Nadiya Hussain won the Great British Bake-Off (in 2015 I think). Now I don't watch it because it doesn't interest me but I really like Nadiya. She's a Bangladeshi/Brit who seems very down to earth and I really like her style. Well the other day I was watching her cookery programme and she made prawn biryana - which looked wonderful. She happened to mention an Indian/Bangladeshi 5-spice mix that "is to die for" and guess who managed to find it out in the boonies in little old Geneva! The ferret here! Now if you live in the UK that's probably no big deal but despite being an international city I feel that Geneva is only relatively recently moving into the modern world as far as foreign ingredients are concerned. When I first came here in 1980 the only ingredients in the shops seemed to be those required to make fondue! Well I might be exaggerating slightly but not an awful lot. It has taken years to be able to get my hands on basic British stuff like tea-bags (I know, the horrors!) but they finally seem to be getting there. Truth be told, you can now get almost anything if you know where to look because, as I say, it is such an international community. When I first started looking for this spice mix everyone wanted to sell me Chinese 5-spice powder but that isn't it. However, thanks to the magic of the internet I found a little Bangladeshi supermarket and was able to navigate my way round Geneva's public transport system just like a big girl and get there and back in 30 minutes with my precious Bangladeshi spice mix. I ended up making her recipe this weekend and while the flavouring was lovely I don't think I did it any favours by using the frozen prawns in my freezer - better to get the real mccoy next time I think, but I have eaten it every day this week (I made waaaay too much as you can see).  Still, on the strength of that and Monday night's programme I have ordered her latest cook book - Nadiya's Family Favourites! We'll see how that pans out but it does look delicious!

The other Sunday I fancied a trip out to a local market about 30 minutes from me. I go to a very small local market on Saturdays but this one is quite a bit bigger. However, when I got there someone had "stolen it" - gone! Just like that! So I stopped and asked a man carrying his market goodies and he directed me to another location as the original location is being improved/black-topped with more parking spaces. Phew - I really like this market and love just wandering around even if I don't buy anything. Interestingly, when I stopped at the fish stall, right next to it were a few tables and bar stools where people were trying seasonal mussels but - this being France - they also had various wines for sale by the glass to try with the mussels! I didn't try any as I was driving but I must admit I do like their style! 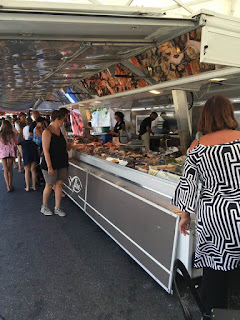 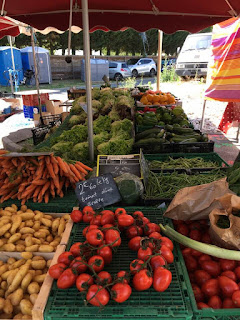 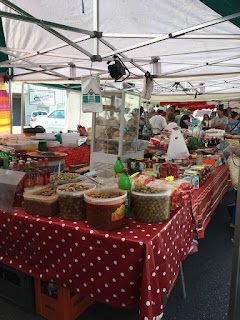 Actually yesterday I was able to pick some of my own home-grown tomatoes and I must say you can't beat the home-grown stuff. Add that to feta cheese, cucumbers and olives and you have lunch made in heaven!

And of course the Tour de France is ongoing at the moment. We have had two Sunday's where our village road has been blocked off for bike races recently. This wasn't for the Tour de France but for a complementary race that they always have around the same time. However, on Tuesday the "real" Tour de France was in our area so once again our road was blocked off, but since I was in work I didn't mind so much. They always go over the Alpes de l'Huez and Grand Bornand before coming down to our local town, so I watched a little just to see if I could pick out various places. Far be it from me to stand out in the blazing heat though to watch that stuff - just not my cup of tea (even though I can now get the tea-bags)!

I think I have mentioned before that every week when I shop I pick up a few items for the local food bank, and when I have a crate full I take it down on the Tuesday night when they open. I have been quite remiss in taking my stuff down there lately so determined I was going to do it last night. When I got there one of the ladies insisted on introducing me to the Chairman of the local Red Cross group that runs this particular food bank and she was telling him how our little charity book store had also made a financial donation. Honestly it was no big deal but it really brought home to me just how grateful they are - particularly the closer they get to October/November when their supplies start to run out. As I was about to leave she stopped me and asked me about our little book shop at work, and then proceeded to drag out a huge bag of books in English to donate. She said she had been given them by an acquaintance who reads in English and boy did I drool!!! Whoever this acquaintance is has wonderful taste in books - I saw Aldus Huxley, among others - and a book that I shall probably buy myself by John O'Farrell, who I find hilariously funny! So I got to leave the food bank with more than I arrived with. My ferret nose working again I suppose!

And finally, I have my big meeting this afternoon. We have two big meetings a year for which we produce four extremely large reports. I have other meetings, of course, but these are the big ones. We just found out we will have TV cameras both inside and outside the meeting room so I guess I'd better not fall asleep for this one (they do drone on sometimes)! But talking of falling asleep, when I got on the bus at the terminus this morning there was a young man fast asleep at the back. When I got off the bus at the opposing terminus 45 minutes later he was still snoring away. Apparently, according to the bus driver, these young men go on the razzle in the evenings and sleep it off the next day by going round and round on the local buses until they wake up! My boss was saying just this morning how tired he is - he has young children who don't seem to sleep well and also final responsibility for this afternoon's meeting, so I told him if he wanted to get on the number 25 bus afterwards and get some sleep, I would wake him up when I got off at the border! Sounds like a deal to me! Well that and the bottle of wine he has got in the fridge for after our baptism of fire! I'll drink to that!