I've been missing in action for a while due to the frantic pace of things here. It's not unexpected at this time of the year and I don't mind at all - but hence the reason I haven't posted much lately. I know when my busy periods are and can work around them but it does mean that sometimes I am just too tired to blog!

So what's new? Oh yes, the Fête de la Musique is over and my goodness what an event that was. There are music events all over - here in Geneva and in France too of course. It's pretty much constant for a few days - one solid, jam packed session, if you will. What I think is a nice touch is that in Geneva they put out pianos on the pavements for people to play if and when they feel like it, and there was a lovely video in the local newspaper recently of a Swiss police officer playing (rather well, I thought) at Geneva train station. 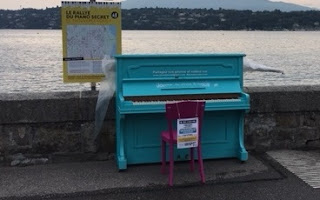 I read in today's newspaper that there were 550 events in 28 different locations attended by approximately 200,000 people. Not bad eh!

Talking of the local newspaper, this morning when I got on the bus I just made it ahead of a gaggle of school kids - about 30 of them I would say, around 10 years old. Oh the noise - it sounded like a fishing trawler coming back to harbour! Not that I mind as I like kids really. Anyway, I was flicking through the local "20 Minutes" freebie newspaper on the bus to check out the weather when I realized two young lads were surreptitiously trying to read over my shoulder! In the end I just handed them the newspaper and said "here you go". Well the one started complaining that "why couldn't he read the newspaper" so I fished my book out of my bag and handed it to him. (The Last Tudor, by Philippa Gregory). It took him about five minutes to realize that it wasn't in French - though I'm not sure quite why it took so long to figure that out. Then the other young man asked if he could read it, so I handed it to him and he could seemingly read a little English. He ended up keeping my book for the entire length of my journey. The teachers were laughing because they were absolutely silent trying to figure my book out. The funny thing is that the ticket inspectors got on and I had since picked up the 20 Minutes again and was doing that little puzzle - you know the one where there are two seemingly identical cartoons and you have to spot the seven differences. So here's me struggling with the "spot the difference" cartoon and Little Billy next to me reading "The Last Tudor". Irony at its best!

In other matters, some time ago a colleague had given me the names of various beauty spots that were worth visiting in the local area. I always write down the names of these places but recently decided it was time to get back into exploration mode. I decided on a place called Chanaz, which is about 75 km from here. So on Sunday two friends and I set off down the motorway towards Annecy to try to find it. Now I didn't want to follow my GPS which was trying to take me through a place called Rumilly, so decided to take another route which seemed to be more direct! Ha, it was more direct all right - it took us over a mountain pass called Col de la Chambotte, and while I don't mind mountain driving I swear if there had been another coat of paint on my left side the cars coming up the pass would have taken the side off my car!  Talk about tight!  But, buuuuuut, oh my goodness, when we got to the top we had a view over Lac de Bourget which just took your breath away! I mean, I have been here over 35 years and this place is still capable of taking my breath away!

Eventually we made it down the other side and in about 20 minutes we found Chanaz, and again it was absolutely stunning. I can see why my colleague had been telling me to visit.  It is located on the Canal de Savières, which leads directly into the Lac de Bourget, which is (apparently) France's biggest natural lake! 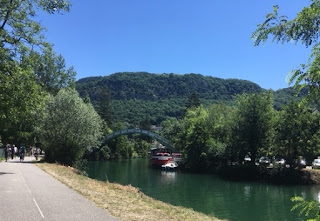 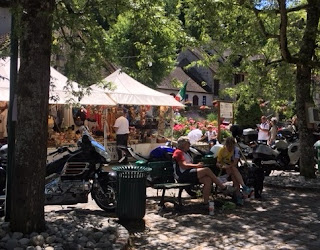 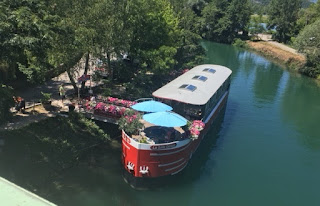 We had actually planned to visit Chanaz last Sunday but for some reason didn't get around to it - which turned out to be a great piece of procrastination in the end because, unbeknownst to us this Sunday was the day they were holding their annual Venetian Carnaval parade - and we arrived right in the middle of it!  Of course we didn't have a snowflake's chance in hell of being able to eat on the waterfront since it was "by reservation only" so we scrambled up hill to what turned out to be a delightful little outdoor restaurant serving a very limited menu but of wonderful food. 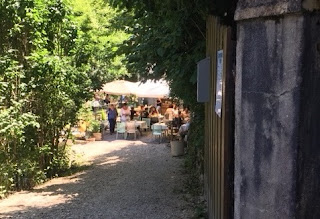 By the time we had finished eating the Carnaval procession was just setting off so we were again in the right place at the right time! Aren't they fabulous! 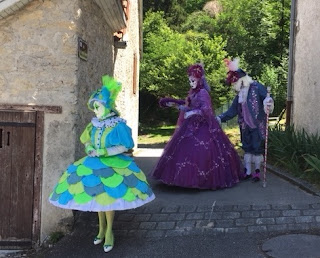 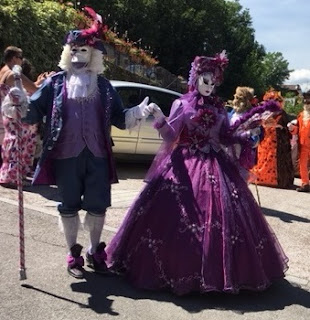 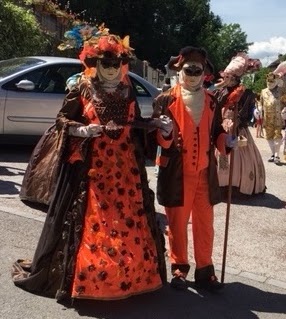 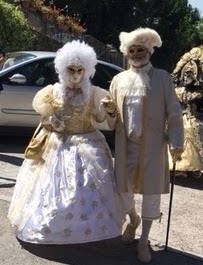 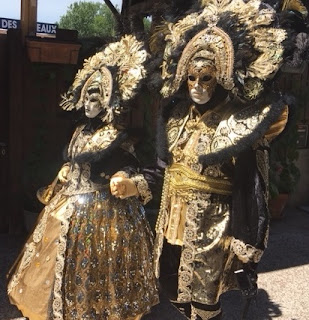 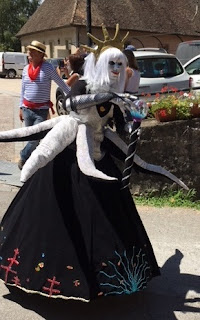 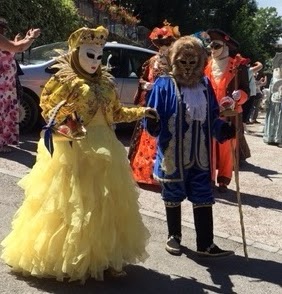 They all looked wonderful but goodness knows they must have been so hot in those costumes as it was scorching. After that we decided to have a little "shufty" in one of the local gift shops which was beautifully presented on a stationary barge. I bought a couple of things as Christmas presents (I like to pick up Christmas presents all year round), and a lovely bag of hand-made chocolate for work.

After that we took a 90 minute boat trip along the canal up to the lake - again very pretty! 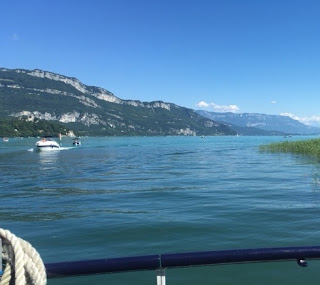 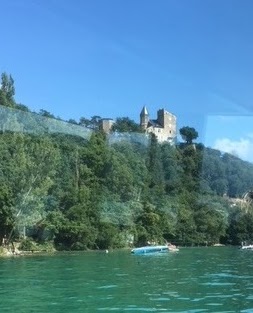 And finally, on the way back to the car, we got to see the lock being used to raise and lower boats in and out of the lake and onto the canal. No matter how many times I see it I am still in awe of the engineering! 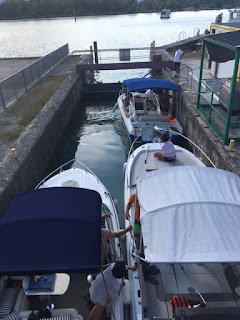 What a beautiful day that was - like I say, some days really are just diamonds!

In other news, I am still looking into the figures for possibly retiring early - that is to say at Christmas this year. It is coming as quite a shock to me even as I have always had it in my mind that I will go at end 2020 and now here I am (potentially) just six months away from retirement!  Our pension fund has confirmed my calculations and I keep running the figures through the French tax system to see if there will be any nasty surprises but so far nothing. The last thing I am waiting for is confirmation from the French bank of the total amount payable in Swiss francs in order to pay off my mortgage in January 2019. Depending on that figure (and I have pretty much calculated the worst case scenario), then it is up to me, but I am very much leaning towards leaving! It's a bit of a shock actually as I really hadn't given any thought to it until about two weeks ago. I will lose around €1,000 a month, which is enormous of course, but I will still have a reasonable pension. So many people have said "just do it" so I really am inclined to go for it. I can take the stress at work as it really doesn't bother me but having not been well the other week and then with my friend dying suddenly I really think it would be good to go in order to get away from this awful commute, which is currently at three hours a day and rising!  More to follow!