Oh it's been a really busy couple of weeks here so I haven't had time to blog or even read my favourites blogs - still got a lot of catching up to do!

So where to start? Oh yes, last Saturday we had our latest board game evening at my neighbour's house. Although it threatened rain all day (all spring frankly!!!) we really lucked out and had a lovely afternoon and evening. We ended up simply splitting into two groups this time and playing card games all evening, which made a nice change. D has loads (and I mean loads) of plants, pots, decorations, ornaments and so on in her garden and it all takes an awful lot of work, but like I commented to her, just occasionally all that hard work comes together and you get a snapshot of just what a stunning garden she has created! 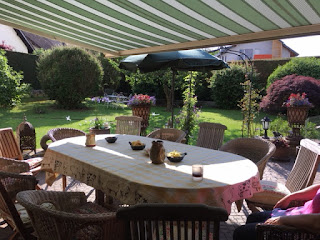 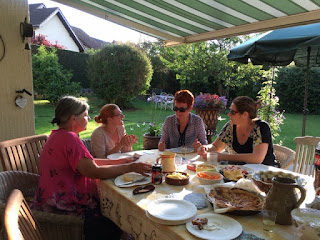 Then the next day we had our annual "clean up the neighbourhood" get together, where our small group of (around) 24 houses all spend an hour cleaning up the area around our homes - to be followed by the annual  "let's all get together to eat and chinwag for the next eight hours" - so that's what we did! I must admit, for the little bit of effort that we all put in our little neighbourhood really does look lovely afterwards. 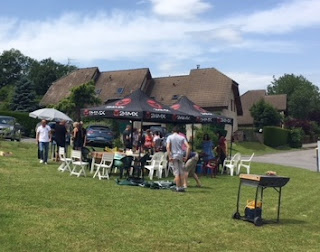 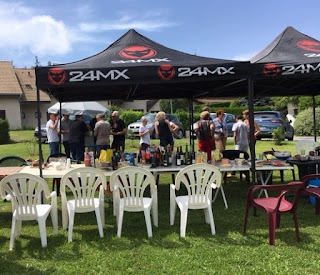 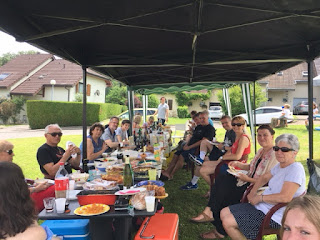 Jumping on to totally different news, there seems to be some kind of "push" from the powers-that-be in the UK at the moment to promote weight loss in a bid to cut levels of diabetes II - or at least, that's what it seems like to me as there have been a few, very interesting documentaries on lately promoting pretty harsh calorie-restricted diets in a bid to achieve rapid weight loss and lower the risk of diabetes. The one programme, which I think was called The Fast Fix, took a group of volunteers who showed a higher risk of developing type II, and relocated them for four weeks in a test programme on a strict diet of 800 calories a day in a bid to lower their risk factors. Now a couple of them weren't even fat, which just goes to show that heredity can also be a big risk factor. It was a tough diet to follow but they all succeeded in significantly lowering their blood markers (I can't remember the "proper" names for half this stuff) in addition to dropping weight. One thing though, that kind of diet might be feasible in a control situation like they were in but I, personally, couldn't see me sticking to it if I had also to be looking after kids and a family and going to work. However, the guinea pigs were then asked to follow the same diet once they left the control centre. It was difficult, of course, but they all did it and the results, from a diabetes standpoint alone, were amazing. It was a diet along the lines of the eight-week blood sugar diet or indeed the "Fixing Dad" diet I mentioned in a previous post. All very interesting, to me at least. They mentioned that if you wanted to find out what your own markers/risk factor looked like you should measure your waist at its narrowest point (just above the belly button) then divide that measurement by your hip measurement. Guess who did it! For a woman your result should be below 0.85 (mine was 0.97) in order to be out of the "risk" category, particularly if you have a BMI of 30 or more (I just come under that but "yikes" all the same!)

I can understand why the government would want to push this as the UK is now, justifiably in my opinion, the fat man of Europe and type II diabetes treatment is apparently costing the National Health Service millions! Makes sense doesn't it!  So with that in mind, I have been browsing through pinterest looking at different fitness regimes (well that and the cake recipes and patchwork patterns!!!) and I stumbled across some amazing pictures of older women bodybuilders. Just wow.  Take a look at this lady!


Quite the inspiration, isn't she!

Since I have been really busy (I don't mind at all) I didn't exercise last week and you know what, I missed it. I only managed to walk the last 30 minutes to work three times this week but hope to get back to the gym also next week. Oh, and did I mention that in a bid to get rid of my bingo wings I have been lifting a few (rather puny) weights!  Nothing to write home about but you've got to start somewhere haven't you.

Anyway, last weekend I went to the local sports shop to buy some weights. The nearest weights to the ones I wanted were 5 kg each so I bought a box of two - and almost fell over when I picked the bloody box up! I see there is work to do then!  Ernestine can rest on her laurels just a little longer!

Only slightly linked to the above, I wrote a recent blog post on the sudden death of my friend, Ian, and what a shock it was, so with the uncertainty of the future brought home so abruptly to me I started taking a look at the maths and have come up with the notion that I could, if I wanted to, actually retire at Christmas! That's quite an amazing thought after 40 years of work, I can tell you! It would mean I would have to take a lump sum from my pension in order to pay my house off and thus have a smaller pension but it certainly is feasible. In all honesty I am looking at going in two years time at the age of 62 because although my house will be paid off it does need work doing and I want to save up for that first (complete replacement of the heating system to start with). So knowing that I could leave the rat race at Christmas if I wanted to is a very nice feeling. As I said, I'm pretty sure I won't go then but .... Add to that that I want to help out with my son's wedding next year (we booked the château in the village last night - it is beautiful) and that his contract as an apprentice expires end July I will be staying on for a bit, although in reality an unemployed plumber has got to be an oxymoron hasn't it!

That being said, my sister-in-law's sudden death two years ago knocked my brother for a six and I think brought home to him that life is moving inexorably on. He now has a very dynamic lady friend, also a widow, who seems to be a little ball of energy dragging him (well he's going along willingly) here, there and everywhere! There is such a change in my brother it is amazing. And it's no disrespect to my sister-in-law - she was the dynamo/the doer in that relationship - but, like I say, I think losing her brought home to Phil that life was for living now because you never know!