Another lovely (but exhausting) weekend!

Just as I was getting into town on  Friday night my friend sent me a message to say that one of our neighbours was organizing an impromptu get together in support of the neighbours' fête. Now this is an artificial fête (of course) but I happen to think it's a great invention as it gives people an opportunity/excuse to get outside and meet up with their neighbours. It may sound silly but I do believe from what people have told me that many people don't actually even know their neighbours or rarely - if ever - speak to them, and I think that is so sad. I remember my friend Steve telling me that he always says good morning to a couple of his neighbours when he is out and about but that's about the extent of it - and Steve is about as sociable an animal as you could ever wish to meet! I think that's a sad state of affairs really. OK no-one wants to get that involved with their neighbours and end up living in each other's pockets, but it's nice when people are friendly and look out for each other. Goodness knows, that was the way it was in my neighbourhood when I was growing up. My mom pretty much never had to take us kids grocery shopping with her because there was always another mom around to keep an eye on us!

Anyway, C very kindly set up a table on our little island and bought out drinks and snacks, with about 10 of us quickly following suit. I only found out about it 10 minutes before arriving home so I had to take along whatever I had in the house - which turned out to be a few beers and some peanuts. Still, we stayed outside and chatted for a couple of hours and had what turned out to be a rather nice time. In a few days we have our annual "clean up the neighbourhood" Sunday in any case, where we all spend an hour or so cutting grass, weeding and so on and then all eat together, but hats off to C for going that one step further.

I had intended to get so much done that evening too, but that went by the way. I had to be up at 4 a.m. as my friend and I were going on our (now annual) trip to the market in Turin, and while I hate getting up at the crack of dawn we both agree we really do enjoy this trip! We made it to Turin around 10.30 a.m. and had until 3.30 p.m. to wander around and fill our little wheelie bags with lots of goodies. Since it is Jordan's birthday on Thursday I was able to pick up a few extras for him too, in addition to the wonderful fruit and veg. Just perfect. It was very hot - up to about 30° - but thankfully it remained relatively overcast so we didn't feel the full power of the sun. Around mid-day we headed off to a little restaurant we had spotted and had the most excellent lunch of (fresh) tuna salad in my case and grilled salmon in D's case. It was stuff to drool over, I can tell you. Looking at the prices I actually commented to D how rich we would be if we took our pensions and moved to Italy as it is so much cheaper than the region of France where we live - which is expensive because of it's proximity to Geneva! 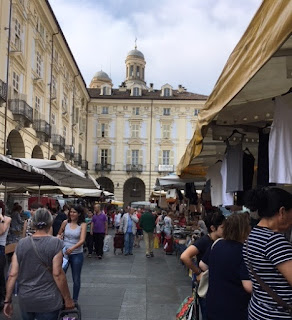 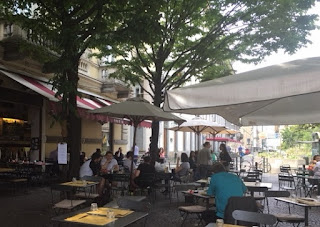 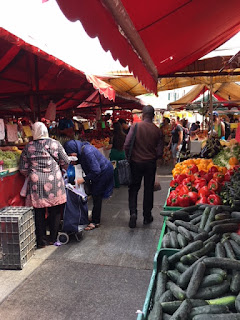 All in all it was a lovely (if very tiring day) - well that is until we neared the French border on the way back. Just before the Mont Blanc tunnel we stopped at the lovely ski resort of Courmayeur but the heavens opened and it absolutely pelted down - but just for about 15 minutes and "poof" it was gone! Really weird but it does go to show how you can't trust the weather in the mountains.

The Mont Blanc tunnel is quite the piece of engineering, I tell you. 11.5 km long cut through the Mont Blanc it took us 16 minutes to drive from one end to the other - so you enter in France and exit in Italy!

The next day we were up and at it again - this time down to our local little town where for the first time they were hosting the "foire aux tissus" - a fabric fair! This was a pretty big fair with such a choice of materials I just couldn't make my mind up. The traders come down from Holland and Belgium to sell their goods and it was just eye watering for me! You could easily spend a small fortune in that place! I think the powers that be have realized that our little town is the perfect venue for something like this given the exhibition facilities and its proximity to Geneva and all the money there! 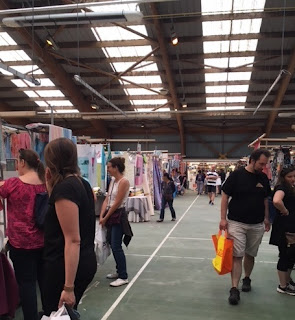 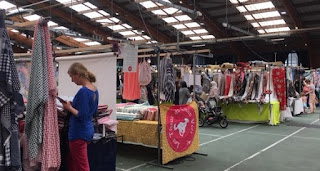 After that it was back up to our little village, which was hosting its annual vide-grenier. They changed the date from September to May in order to take advantage of the marquee that had been set up for the village fête the other week. Very often we get bad weather in September so I think changing the date might well be a plus. Apparently it wasn't such a roaring success though because Sunday was also Mother's Day here in France and I guess a lot of families were eating together rather than going out. 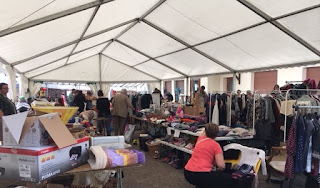 And finally, I saw a rather lovely video this morning of a young man risking life and limb to save a little boy who had managed to get himself hanging over a fourth floor balcony in Paris!! The young man is a recently arrived immigrant from Mali who was hoping to make a better life for himself in France. Judging from his heroism he is just the kind of immigrant that France needs don't you think!

Anyway, President Macron was so impressed with his bravery that he had him over to the Elysée Palace to meet him, and I believe his request for French citizenship will be expedited. And it turns out he has been offered a job in the fire department! It's nice to see something good coming about for such a brave young man isn't it! 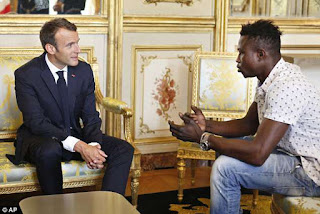 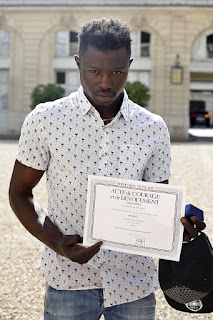