I was pleased to see many articles/programmes this week to mark the 100th anniversary of the "Representation of the People Act 1918" wherein some women in Great Britain and Ireland were finally granted the right to vote under certain circumstances. Under this Act, all men over 21 were granted the right to vote but only certain women over the age of 30 who held £5 of property or whose husbands did were granted that right. There is much debate about the tactics used by the militant suffragettes as opposed to the lobbying of the moderates but whichever way you look at it, 100 years later we women owe a debt of gratitude to those ladies, many of whom suffered indignities, force feeding, imprisonment and torture in order to obtain what I consider a basic human right. 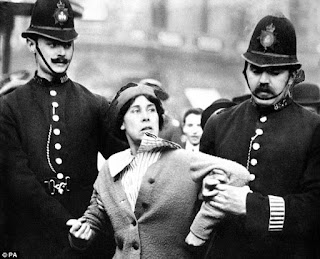 In the same vein, I very much enjoyed the film Made in Dagenham which was based on the 1968 strike of machinists at the Ford factory in Dagenham, Essex, to lobby for equal pay with the men. Those brave women took their case to the then Secretary of State, Barbara Castle, and when Ford threatened to pull out of England if they continued to push for equal pay, the wonderful Barbara Castle stood with the women and went head-to-head against Ford. Amazingly Ford eventually backed down and went on to become, apparently, a "model employer as a result". The actions of these women became the catalyst for the 1970 Equal Pay Act. It's a funny and moving film but I don't think we women today realize just how brave those wonderful ladies were going up against such a patriarchal society.

When we were talking about this on the bus the other day my colleague was telling me that she had just watched the latest episode of The Secret Life of Kids and in tribute to the suffragette movement they had, for the first time ever, filmed a programme entirely with little girls. In this episode, the girls were asked what game they wanted to play buuuuuttt not all of the girls were given the vote. After that, they were invited to choose what they wanted to have for desert - ice cream or a cupcake - and again they weren't all allowed to choose. Finally, a little later they were all given the vote on a third subject and my colleague was saying how quickly these little kids realized that only some people getting to "choose" was totally unfair!


On another note, we had our third boardgame evening last Saturday at our former neighbours' new home. Crikey that was quite the "drive from hell" getting up to their place, it being at 1,200 metres with narrow roads slick with ice, but we got there (and back) all right and had a lovely evening. This time round there were 12 of us (one new gent - a friend of our hosts - joined us). At one point poor Alexandre, our other neighbours' 15 year old son, had to mime a striptease artist playing golf. Poor kid. He is pretty shy at the best of times so for him to get that one really tested him but showed what a good sport he was by giving it his all. We spent the last hour or so of the evening playing (or, re-learning how to play, I should say) a card game called belote. I had played it many, many years ago, before I was married, and I remember it being the kind of game that you could start playing at 9 p.m. and keep on going until you keeled over at around 5 a.m. so I'm kinda hoping we keep this game as one of our mainstays. My youngest son and his gf also came along again and I have to say it is really nice to have the "youngsters" joining in with us old fogies by their own choice!  Jordan had to mime being a thief climbing onto an elephant (or something like that) and it proved to be a simple but fun game. There was waaaay too much food of course, although I was rather pleased with the way my Victoria sponge turned out. I haven't made one of them in donkey's years so it was  real treat. 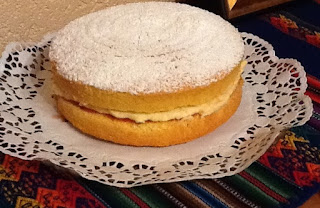 It was slightly awkward at the end of the evening as one of our group had been "collared" at the mail box by another neighbour (who is not known for her friendly disposition) and having heard about our little group somehow she was basically fishing for an invite to join! What to do? In the end we decided that the group was already snowballing and 12 seemed to be a reasonable enough sized group to accommodate in one person's home. Since this particular neighbour and her husband wouldn't be anyone's first choice on the Christmas list we decided to limit our group size for the moment. I think when my friend mentioned that if we let the Bs join our group then Mrs. Tupperware (so-called because she was a Tupperware rep) would probably want to join, and with the best will in the world she can (and does) talk the hind leg off a donkey so I think our decision became a no-brainer at that point. We'll see how it evolves I guess, as it might be easier to accommodate a bigger group in the summer when we can play outside. Until then it will sadly have to be by invitation only!