I hope you all got to see what a pretty moon we had last night. It was apparently a magical combination of three different factors that made this "blue moon" such an exceptional one, that combination being so rare that these moons really do only occur "once in a blue moon" - hence the expression. We had glorious weather the past couple of days so I was able to appreciate it over the mountains as I drove home but by about 8 p.m. the clouds had moved in ready to wreak havoc and the moon was hidden. Still it was just beautiful, and judging by some of the photos I saw today some people got even better views than we did.

And I couldn't resist Raul Malo singing this:

In other matters, not a lot going on here. We finally had a couple of days of good weather so I have been able to get out and walk at lunchtime and I have also been to the gym here at work when it has been wet. Trouble is, when it is wet, of course, everyone else seems to decide to go to the gym too instead of running outside so it can get a bit crowded. Still, at least I get a bit of exercise in. After I came back from slogging my way round the Botanical Gardens yesterday I saw an article in the news about Angelina Jolie visiting the French President's wife, Brigitte Macron, and taking in a trip to the Louvre. Crikey, beautiful outfit but look at those heels!!! I mean, who among us trudges round the Louvre in those killers! 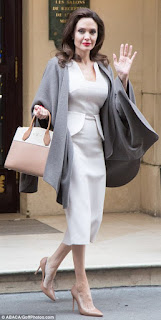 As I trotted out of our building into the park along the lake for my walk, I noticed that flowers had been left next to a sculpture that I had seen before but never taken the time to really look at, assuming it was some Viking hero.

Turns out it was a sculpture of Georges Kastrioti Skanderberg, an Albanian nobleman. The story (part truth, part myth I suspect) surrounding Skanderbeg is "built in part of the antemurale myth complex which portrays Albanians united by Skanderbeg as protectors of the nation and Christendom against "invading Turks" (taken from Wikipedia so who knows). Anyway, his statue being strewn with flowers, I guess by local Albanians, at least it drew my attention enough to actually go up and read the attendant plaque after all these years. 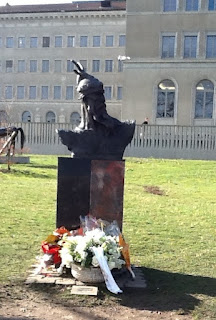 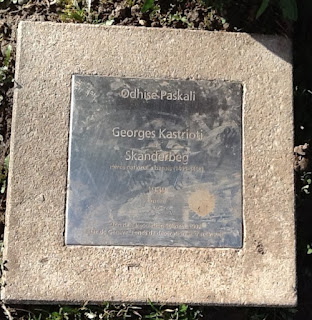 And moving seamlessly on, on Monday night I went to my usual sewing club for a good natter and to try to catch up on some household/patchwork sewing which I can't be arsed to do during the week. I caught up with a bit of homework from my last patchwork course in December, shortened a pair of trousers and was working on cutting down a couple of pillowcases that were just too big for my pillows. One lady there had made a beautiful, totally reversible polka dot jacket, so she kinda made my pillow case repair look slightly sad but to be honest I enjoy the yacking as much as I appreciate getting some things repaired that I am just too tired to attack that on a regular work night!

Then on Tuesday I had my once-a-month patchwork lesson in Cluses. We were having a go at free motion quilting and to be honest I didn't really enjoy it. Lydie, our teacher, was quite honest about how difficult it can be and how uninspiring until you get the hang of it, but at this early stage I think I would rather quilt by hand than have that thing run away with me! Add to that the fact that the machine foot required to free motion quilt on my machine costs over €100 and the rulers/stencils being pretty darn expensive too, I think for the moment I will give it a miss.  Next lesson we are going to start making a rather pretty storage bag so we will see how that turns out.  Because I had missed the last lesson as I had to work late Lydie very kindly stayed late to help me catch up with the others. She never makes an issue of staying late anyway as long as someone needs help but it meant I didn't leave till 11 pm so a long day all in all. I go straight from work and since I leave for work at 7 a.m. I am pretty much on my knees after these lessons.  Still, I am still enjoying it so I guess I shouldn't complain too much.

And finally, Steve called me last night, just back from his trip to Antarctica. He said it was just wonderful and neither words nor pictures can do it justice. It's a pretty expensive trip but one I guess I might consider once I'm retired as he waxed lyrical about it. It's great to see he's just as enthusiastic as ever. Good for him is all I can say!
Posted by Treaders at 15:58