It was a pretty quiet weekend "chez moi", which was rather nice. No real plans and since the weather was crappy I like it "quiet". After running to the market I made the mistake of thinking I would "just pop in" to a local store as I wanted to replace both bedside tables in my bedroom. They were originally from IKEA and while I have nothing against IKEA stuff these had seen better days. So I decided to hop on the motorway and go to a store near the Swiss border. Big mistake! You see, the Swiss schools are out this week for spring break so the bloody motorway was chocabloc in both directions with people heading up into the mountains to ski. It was made all the more chaotic since there is a large toll point on this particular stretch of motorway (about 18 toll booths) which would slow the traffic down anyway, but this traffic was just such a royal pain in the butt! Had I given it any thought I would have realized it would have been better to take the back roads but you live and learn I guess. I did buy a couple of cheap and cheerful bedside tables and two new rugs to go with them and they are a vast improvement over the previous look so all was not lost.

Later on Saturday I got to watch England play Wales in the rugby six nations! Lovely! It was a pretty good match which England won (yay) although against anyone else I support Wales as my mom was Welsh. After that I managed to catch British chef Nigel Slater on his culinary travels through Turkey. He was invited into various Turkish homes, many of them peasant farmers, but the food they cooked looked out of this world. I am no expert on Turkey as I have only been there twice but it is a country I would definitely take great pleasure in going back to. The next evening he was travelling throughout Lebanon and again, although I didn't catch much of that programme, the food looked fabulous. I have to say though, that while the ingredients in these countries are usually first class, there is a reason it takes so many women to make such fabulous feasts. The workload involved serving up meals like these would probably be beyond most modern day Western families where both partners work outside the home. Shame really as the act of sitting down together with family and friends to such wonderful food is something that I feel we have lost out on.

And talking of wonderful food, I found the time to type up the Pad Thai recipe from my course last month. Again I have to stress that the seasonings/sauces are all very personal so I think you can "wing it" an awful lot once you have the basic ideas. I hope you give it a shot. 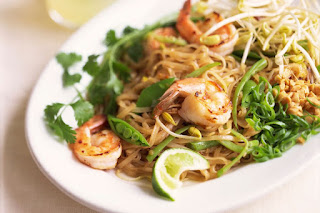 Boil it up and simmer all together for about 20 minutes.

Add oil to pan and cook the garlic gently. Don't let it burn. Add the Pad Thai sauce (as above) and the shrimp plus a drizzle of water. Then add the tofu.  Cook for a little while. Add the beaten eggs, a handful of noodles and a little water, if needed.

Add the oyster sauce, the sugar, the chives and the beansprouts. Mix thoroughly. Sprinkle with the peanuts and the chili pepper and serve with lime wedges. Enjoy!

Back to the weekend, later on Saturday evening I had a binge watch of season 2 of "Desperate Housewives" (I know, which planet have I been on these last 10 years). When it first came out I saw about 20 minutes of the first episode and thought "yuck" - just a bunch of too pretty women with too pretty homes running around being vacuous. Which probably just about sums it up really but when my friend offered to lend me the series I kinda became hooked. Of course that has nothing to do with the fact that I find "Carlos" absolutely gorgeous. Nothing at all!

Strangely enough I did the same thing with "Downton Abbey". Couldn't be bothered to watch it and then when someone lent me the box set I got hooked. It doesn't always work out that way though as another colleague lent me "Dexter" and I tried valiantly to get through two DVDs but it was just way too weird and waaaay too violent for me so I gave it back unwatched.

I was slightly more productive on Sunday mind, and made a madeira cake (I have had a craving for one of those for ages - reminds me of my childhood), a lentil soup and a potato dish that my former boyfriend's (Algerian) mother gave me the recipe for. Delicious!

Then a friend and I decided to brave the cold and catch the last day of a patchwork exhibition by a small club in Geneva. And again, as always, it never ceases to amaze me how talented these ladies are. I can only hope to be half that good sometime in the distant future (and that's pushing my luck, to be honest). 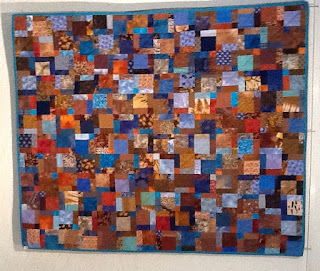 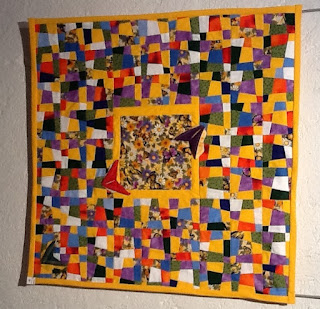 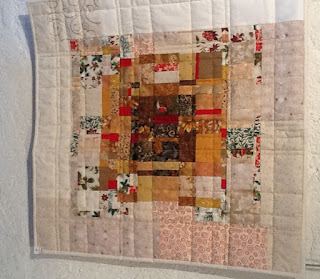 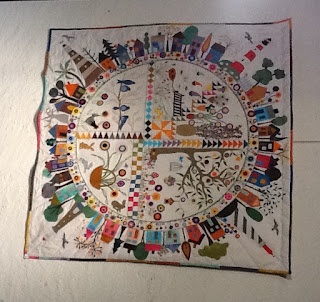 I've seriously got to retire. I mean all this "working" baloney is seriously eating into my interests! Just another couple of years to wait!
Posted by Treaders at 15:31