How to stay young

..... is the title of a BBC series I came across last week. The second episode was last night and I have to say it was pretty interesting. It had nothing to do with miracle creams and liposuction and so on, but was an interesting experiment aimed at the "hidden" dangers within our bodies and courses of action to do something about it.

Each programme follows the story of three volunteers, mostly in their 40s and 50s from what I can see, who agree to follow a 12-week programme devised to tackle problems that are causing them to have bodies which are biologically older than their actual age - which I guess could probably include most of us, unless we are ultra-fit and healthy. Well it definitely includes me! They start off putting the volunteers through a series of tests to assess their percentage body fat, their strength, their blood pressure, blood sugar levels, cholesterol levels and so on, and then based on statistics for others the same age, the "guinea pigs" were shown the difference between their actual birth ages and their body's biological age. As you can imagine, if they had agreed to participate in this experiment it was because all these people had "issues", but to be honest, not obviously so. One lady was 57 and very slim and so was shocked when her percentage body fat showed up as 48% (I think the maximum should be no higher than 25%). She admitted she was lazy - for instance she said she would drive to the nearest shop which was "minutes away", and indeed when the presenter asked her to walk with him to the shop and timed it it turned out it was 1 minute and 20 seconds away on foot!  According to the strength tests she was in the 3 percentile for muscle strength - that is to say, weaker than 97 other people her age out of a hundred - and her biological age indicator showed her to have the body of a 75 year old!

Another man was 51 and obviously overweight - although again, not excessively so. He was a chef but said that chefs often don't have the time to eat properly so he spent his time picking at fries, eating pies - and also admitted he loved his beer. His biological age worked out to 90 - again another shocker. So the three guinea pigs were put on a 12-week programme to address their various issues - one lady had depression, another had sleep problems - none of it was about losing weight for the sake of it. Many of the techniques used in the programme were of course similar - walking for an hour a day would probably never do anyone any harm would it! And at the end of the 12 weeks they revisted all the tests they had done and in every case, their baseline figures had improved. All that in 12 weeks! It was very motivating, I can tell you, and they all looked to have gotten some "ooomph" back. Of course most of them also lost weight but they never announced what their weight loss was because that was not what they were focusing on. If you think a 51 year old with a 90 year old body was shocking, apparently next week they will showcase "the worst age gap" they have had on the programme, so that should be interesting.

I hate to think where I would be on that scale - it would be interesting to find out though. On that note, I have done well so far this week with exercise (five times since Monday). My fitbit already confirmed that I am pretty sedentary, averaging only around 6,000-7,000 steps a day if I don't do any extra exercise. If I want to make it to the 10,000 recommended steps it means I have to add in at least an hour of walking per day - which in my case means lunchtimes, because I'm not getting up any earlier to fit in extra exercise (and in any case I am not a morning person) and lunchtime is the easiest time for me. Anyway, so far so good, and if nothing else I am already enjoying it.  I'm looking forward to next week's programme in any case.

On another note, I have been a busy little bee in the kitchen lately. I made pumpkin soup, ham and split pea soup and Dorset apple cake this weekend. On top of that, since Sunday's vide-grenier was a bit of a wash-out my neighbours brought round some of the rather nice looking sausages that were left over from the BBQ stall. So last night I threw together what I am laughingly calling my version of "cassoulet", using the sausages and a few odds and sods I had hanging around. Threw it all into the slow cooker this morning and we will see what it tastes like tonight, 12 hours later. I suspect the person who "invented" cassoulet will be spinning in his grave though! 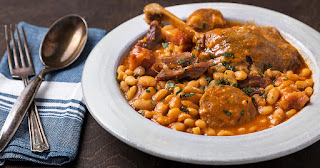