..... and I'm gonna miss 'em! Bugger it! In all my time in Geneva I have never seen this display (although I think they did visit once before) and I will be away on vacation when they visit!  Darn and drat!  From what I can tell they are magical visitors who will shortly show up in Geneva "owing to an incredible alignment of stars and a shower of meteorites rushing to earth." Quite coincidentally the city's Mayor had been forewarned that the clock at the Museum of Watchmaking had stopped for a few seconds, as had all Swiss watches. Happily a few seconds later, all was back to normal .... except everyone had lost a few minutes.  Fortunately, the world’s greatest scientists, gathered at the Geneva research center and working on the acceleration of the particles of the Higgs Boson, discovered through ancient writings the possible existence of Giants living behind the Planck wall, before the Big Bang. After intense study of these writings, they have concluded that Geneva will be visited next week by Great Grandma Giant and Little Giant.  While Great Grandma Giant can speak, only her Lilliputian helpers can understand her, so they have to come along for the visit! 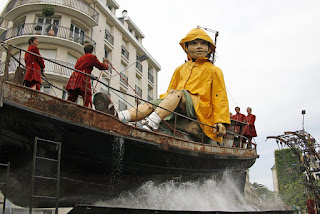 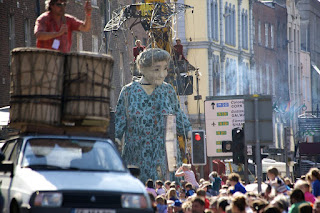 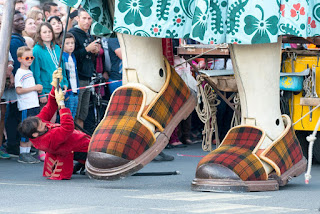 I believe Great Grandma is 8 metres tall and has been sighted in other cities around the world, but this is the first time she will make an appearance in Geneva. I am sooooo sorry to be missing this as it really is right up my alley - just like Les Flottins at New Years. Oh well, the thought of flying off to Rhodes assuages my angst somewhat but really, I would just love to have seen this. And as I have said before, I am so grateful that there are people around with the enthusiasm, ability and dedication to put these kinds of shows together!

In other news, I weighed myself again on Monday and again hadn't lost a single pound. I'm not totally surprised though as last week was hectic with meeting-related stuff and I got out of my routine. It's a good job I lost 3 lbs the first week I guess as that still makes it 3-for-3, but seriously, I have to get moving on this weight-loss business.

This weekend was quiet-ish with nothing planned (I love weekends like that). Even though the weather wasn't great I still got outside and hacked back bushes and trees to my heart's content - I told you, I love this cold weather!!! Then on Sunday my village held its annual vide-grenier (car boot, flea market??? - attic emptier in French), which, sadly, was a real disappointment. There were hardly any stalls there, but then they had forecast bad weather so you can't blame people for not wanting to set up stalls in the cold and rain can you. The sad thing is though, in the end the weather was fine and sunny, if cold, so it could have gone so much better, but hats off again to the volunteers who pull these things together.

The view looking at the Mairie in my little village is absolutely spectacular and I had always wanted to try and capture it (you can see way into the alps at the back) but all I managed to get on Sunday was this shot with the clouds blocking out the mountains. Oh well, another time I guess.

After our short stint at the vide-grenier, I had seen a patchwork/embroidery exhibition in a local château which was on its last day so we decided to give it a shot - and we definitely weren't disappointed (to be honest, we never are)! It was held in what must have been, at one time, a barn belonging to the Château, but the barn was beautifully renovated and of course the needlework was oh so beautiful! 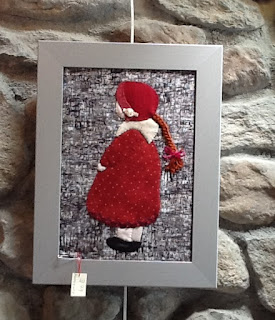 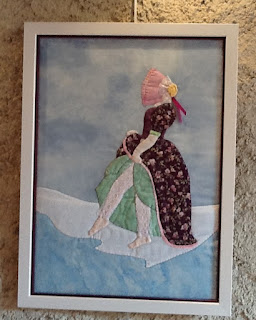 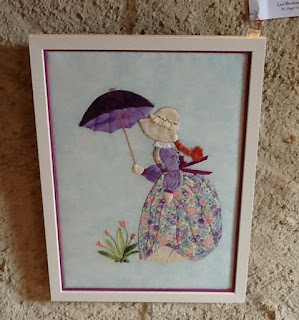 There were many more, larger and more traditional patchworks but with the lighting in the barn I wasn't able to do them justice, but I think you can probably get the general idea of just how much work goes into this.  Funnily enough, my patchwork club started up last Monday and my other sewing club started up again last night (I alternate Monday nights), and last night Thérèse, who has been the "Présidente" for quite a few years, asked for a volunteer to take over. Now I am one of the few ladies working full-time and I have the commute from hell, plus I have only been going - I think - three years, so I really don't think I would be the best person to take over. She said there's not much to do ..... and I'm not totally clear what all it involves - but nobody else would volunteer. I didn't volunteer either (for the above reasons) but I may have to re-think. She said there are two meetings you have to attend each year (they only last about an hour) and then ..... everyone has a drink afterwards - so guess who might be volunteering after all!!! Anything for a free drink! So from now I should like to be referred to as "Madame la Présidente". Yay, get me. How can they possibly turn down my request for French citizenship after this!!!!

And finally, I mentioned in a previous post how useless my brother is with technology. Well I had spoken to him on Sunday and he was a bit down (there are days like that I guess) but yesterday at work I got a Whatsapp message from him saying "had a great night's sleep, feeling better today, miss you and can't wait to see you again". Oh dear, he screwed up again (obviously thinking he was talking to his lady friend). I just wrote back and said "glad to hear it but you might want to get your glasses fixed". Still haven't heard back from him!