Didn't we luck out!

Friday (St. Patrick's Day) was my son and his girlfriend's wedding day, and I have to say we really lucked out with the weather. Actually it had been lovely all week but they kept forecasting rain "for tomorrow". Then "tomorrow" kept getting pushed back so we did, indeed, have beautiful weather "on the day" and "tomorrow" (i.e. Saturday) it piddled down more or less all day. I guess the Gods were indeed smiling on us!

I went to work during the day as they weren't getting married till 5 p.m. but I did make sure to leave early after having a shower at work and getting changed. The Geneva Car Show was on (what a pain in the butt that is) and by all accounts 690,000 people visited it, so I left nothing to chance and left work really early to get to their village. Maybe I'm a bit obsessive/compulsive because I was the first one there, but I prefer that since I didn't really know where I was going and the thought of screeching into the parking lot at the last minute gave me the heebie jeebies!

There were about 20 of us there and apart from the actual ceremony itself it was a very laid back affair, lasting only about 20 minutes. The lady Maire began by reading out several articles of the Swiss Civil Code (their rights and obligations under Swiss Law) and then asked them individually if they accepted the other as their spouse. After that, a few words of wisdom, a quick poem and that was it - they were married. Lovely!

With the wedding celebration already being planned for July, I had wondered why they had suddenly brought the civil ceremony so far forward but it turns out that Lily's grandfather is seriously ill and had recently taken a turn for the worse, so they brought the ceremony as far forward as they could in order for him to be able to attend. 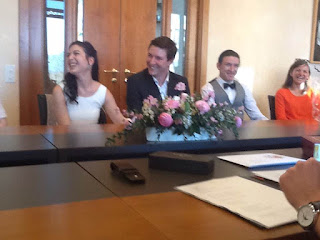 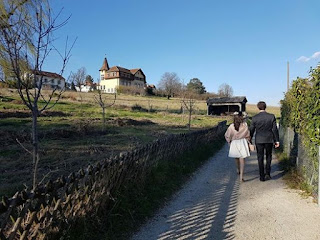 After the ceremony we all went back to their place for a very laid back dinner - "grab a seat and a glass where you can" kind of thing. Absolutely perfect to my way of thinking, to be honest.  Now onwards and upwards to the celebration in July when family will be coming in from abroad. Aaaah, one down, one to go!