Roly Poly Hippo Takes A Bath was one of my youngest's favourite story books when he was little (about 16 I think - nah, that can't be right. I'm sure he can read now - although you probably wouldn't guess)! You know, it was one of those books where there is one line per page and lots of pictures of Roly Poly Hippo getting nice and clean in his bath and then going outside and rolling around in the mud - much to the horror or Mommy Hippo! Now I don't suppose this has much to do with this post really but I do seem to have some kind of word-connection kinda thing going on over the events of the last few days.

The first I guess is this weekend. As I have mentioned before, the road where I live is called (in French) fields of song, not, as I originally thought, because of the bird song, but because we have loads of underground mountain springs which "sing" as they trickle down the mountain. In fact, our water is of such good quality that it is not "treated" as such, which means we get to enjoy real spring water which is so much better than some chemically treated water I have tasted.  The downside of that, though, is that if ever our little village has excess water and the local town is in short supply, we are not allowed to sell it on to them - but then I can live with that, I'm sure!

Five of us home owners recently had the opportunity to purchase small tracts of land directly backing on to our gardens, something we did just in case the field behind us (the one in the header photo to this blog) is sold for construction (although technically it is non-constructible land) and we wanted to be sure that they could not build an access road immediately backing onto our homes. What that now means is that we are also responsible for the upkeep of the land and so on, although in the 28 years I have lived here the HLM (the owners of the land) have never maintained it - it has always been the homeowners. Another point, however, is that if, on the rare occasion, the rains/spring water get too much and flood the village road, we are also responsible for taking care of that. So the five homeowners got together and have decided to bury pipes under the land in order to channel the spring water safely away from our homes and from the road. The only problem is, two of my neighbours already did this by hand-digging trenches and laying pipes, my immediate neighbour had someone in to do it last week-end, and now I have mountain streams flowing through my back garden - which sounds lovely but definitely is not! I now need to do the same thing, but can only realistically do it when my neighbour "further downstream" is also ready, and since he has a helluva lot more pipeline to lay than me I think he wants to wait until April to do it. Hence the reference to Roly Poly Hippo, because we spent the last three days sloshing round in the mud in our wellies digging ditches to temporarily channel the springs securely. Yuck! I only ever occasionally (maybe three weeks out of the year) had actual "flooding" in my garden (never in the house) but now I have a permanent stream that needs to be taken care of pretty quickly!

The other thing that made me think of Roly Poly Hippo was the wonderful show three of us went to here in Geneva last night - Tango Fire!!! Oh man, was it good. I love the passion and intensity of Argentine tango anyway, and this group were just spectacular. 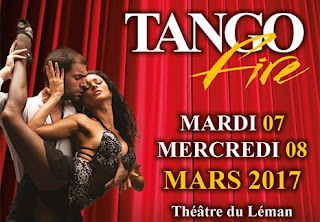 When the women strutted on stage in their skimpy outfits my friend suggested I get something similar for the wedding next week - so there's another one just got crossed off my Christmas list!

It was funny though, because after the show finished, the audience started going up the stairs to the upper exits - and I swear you could hear the creaking knees (mine included) from a mile away. So if ever you feel the need to beat yourself up comparing yourself to these show girls by looking like a pregnant hippo with fat ankles - I can highly recommend this Tango Fire! Just sayin!
Posted by Treaders at 16:07