..... we could be 30 again! Wow, what a lovely couple of days I've just had. My ex and I got married in Switzerland in 1985 and moved to D.C. where I worked initially for a small law firm but was then offered a job at the World Bank. I have to admit the law firm was quite a shock to the old system - I mean, coming from Europe with six weeks vacation, 10 days official holidays, medical coverage and the culture of actually going out for lunch, then being expected to eat lunch at your desk while working, getting a generous one whole week annual leave and no medical coverage - just wow! That being said, they were nice enough but obviously when the opportunity arose to work at the Bank under much better working conditions and where I could use my languages, well I just jumped at the chance, of course.

It was at the Bank that I met Angie. Angie is Indian and ended up working with me in the West Africa Section. We hit it off instantly. You know how sometimes you meet someone and you seem to be able to talk about anything and everything - well that was what it was like.  In 1987 I got pregnant with my first child and my ex pushed and pushed for us to move as he wasn't happy in D.C. So very, very reluctantly I ended up giving up my job at the Bank and moving to Pittsburgh. Now I have nothing against Pittsburgh, but frankly I didn't leave Birmingham (U.K.) to end up in Pittsburgh - that just wasn't what my dream was all about. And to be honest things didn't really improve in Pittsburgh anyway because although we were near family my ex was still working nights and weekends and I was working all hours God sends from home while looking after my son. It was just no life, so when I had a phone call out of the blue to offer me a job back in Switzerland we jumped at the chance, and moved back in 1989.

Now I hadn't seen Angie since I left D.C. in January 1988. She stayed on at the Bank and I remember getting hold of her and another friend at the time of the Washington sniper horrors and basically just wishing them to "stay safe". As a side note, I actually lived in Montgomery County and one of the ladies that those bastards shot was sitting on a bench outside Silver Spring metro station - the one I used to get to work every day! Because I knew so many of the areas where those pigs were killing people, I remember being horror-struck by it all!

After that Angie and I chatted I think a couple of times via skype and again it didn't feel like more than a few months since we had last seen each other. Eventually we got in touch via the miracle of Facebook and I got to see pictures of her (now grown) girls and she got to see pictures of my "baby's" wedding last week - you know, the one I was on maternity leave with the last time we saw each other! Well it's strange how fate works because her oldest daughter now works for the U.S. Department of Agriculture and was coming over to Geneva for her work - and Angie (now retired) contacted me about meeting up. And that's what we did yesterday! Despite the almost 30 years that have elapsed and the generous extra padding that comes with middle age, we both instantly recognized each other and more or less went "so, where were we"! We got to have lunch together in the company of a very beautiful peacock who was strutting his stuff through the lunch tables, and then yesterday Angie took herself off to Chamonix, Mont Blanc, which is about 45 minutes from my home (I told her to watch out for the photo opportunity with the slobbery Pyrennean (sp?) mountain dog that grossed my mother-in-law out). 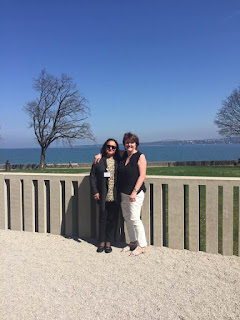 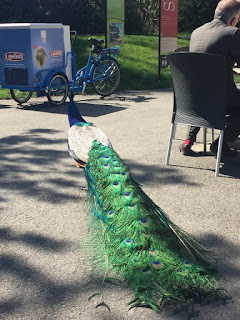 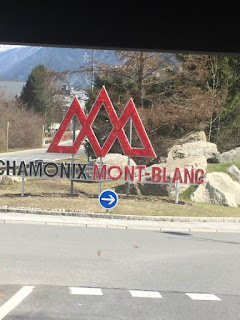 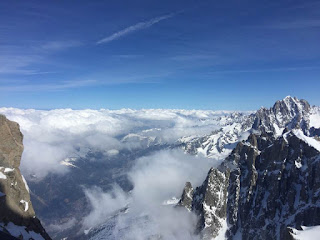 The funny thing is, when I left D.C. her then-8-year-old daughter very sweetly gave me a blue plastic bracelet and I was so touched by it that I have kept it all these years!!!! Angie, like me, is divorced and, again like me, her children are grown up and out of the house. She was telling me that she took herself off on some kind of "solos" trip to visit the U.S. national parks and had a wonderful time. I was telling her that I do "solos" trips too and love them, so she mentioned that we should plan a trip somewhere in the U.S. together soon (sounds great to me). But then I mentioned that I would really like to do the Golden Triangle in India (Delhi, Agra and Jaipur), and she laughed and said "well you know I'm from Jaipur and I go home every year so why not let's make another date"! Sounds great, kinda like Thelma and Louise but without the icky bit at the end!

And all this time, Steve, who came out to visit at Christmas, is on whatsapp with me shouting (metaphorically) "DO IT, DO IT, IT'LL BE GREAT"! So you know what, I think I will!

Funnily enough, Steve called this weekend and was asking what my holiday plans were for this year. I told him I had to get the July wedding over first but then after that maybe go away for my birthday in September. He mentioned that he was going to Rhodes again with his brother and his wife, but that he wasn't staying in the same hotel as they all needed their space - so why didn't I join him out there!!! And by jove I think I will! He's great company and Greece is beautiful, so what's not to like!

I guess all this "new stuff" is why I have felt quite euphoric lately. I had no idea why really. It could be because spring is here and I love spring, but I think also the thought of just doing "something else" is what is really doing it for me. Happy times indeed!