It's been a while

As I mentioned in a previous post, I have been frantically busy these last few weeks preparing for a big meeting in mid-December. While I'm still busy at least I got my last big report (250 pages) off to the Translation Department (they must be thrilled) so I am finally able to catch my breath, a little. All that to say that not much has been going on in my life lately (although WHOOOOAAAAA to what's been going on in the rest of the world)! Crikey - Trump! Who would have thought it. I have no great affinity for Hilary either but the thought of the US having Trump represent them on the world stage just makes my mind boggle! Still, it is what it is, as they say, and like it or hate it we now have to deal with it.

My boss was telling me that they were watching the news on the day the results came in and his five-year-old looked at Trump on the TV and said (in Spanish) "is it Darth Vader papa?" Dad just cracked up (and no, they're not Mexican). In fact, my lovely Mexican colleague has just been shaking his head in disbelief, while sending round some rather funny pictures. There was a great one about a new sport in Mexico that shows a bunch of athletes running up to a wall and scaling it with ladders, but I couldn't figure out how to load it.  Then there were these:

Talking of kids, the weather has been beautiful here in Geneva and when I can I hop off the bus on the Mont Blanc bridge and walk the 30 minutes to work through the park. When my oldest started his first year in the international school, we had him riding the school bus to school from the stop outside my work. He was only five but since I could stand with him at the bus stop and it was the last stop before arriving at school we knew he would be OK. So on the first evening I asked him how he had enjoyed his bus ride. He said it was fine and "I got to see the man's willy"! I nearly fell over and asked him to say that again so he did - "I got to see the man's willy"! I didn't really know what to think but Mother Hen here was already mentally drafting an email to the school about the pervert driving the school bus. Anyway, the next day as I was driving to the bus stop my son shouted out "look mommy, there's the man's willy"! Talk about relief - I guess the moral of that story is take a deep breath before you fire off an incendiary email! 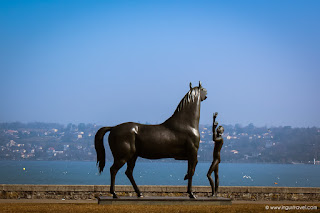 Anyway, our drive in to Geneva was hell (still is) because of the sheer volume of traffic on the bridge. Problem was if you missed the school bus you had to drive all the way out the other side of Geneva to school, thereby making you at least 40 minutes late for work so, as you can imagine it was pretty stressful. One time, however, my ex made it to the bus stop in really good time so he parked the car and was standing waiting for the bus with my son when said son asked if daddy thought he (the five-year-old) was strong enough to push the car. Dad said why not let's give it a try, so making sure the handbrake was on, dad and son went to the back of the car and started "pushing" to see if the car would move forward. After a couple of minutes of pushing, little 'un looked up and said "oh daddy, there goes my bus"! Way to go dad, get there 20 minutes early and still end up chasing the bus all the way to school!

Which reminds me of my lovely friend Joyce telling me the story of how many years ago two of her three young children also caught the school bus and between her and her husband they had to juggle picking the kids up at varying bus stops depending on ..... So one time her husband said to her son Kevin to get off the bus at the Pickwick. Well her husband was waiting at the bus stop and when Kevin got off dad asked where Steven was (the youngest), so Kevin said "well you didn't mention anything about Steven" - so yet another dad had to chase a school bus - this time to recuperate their youngest who had been left on the bus by his older brother!

Talking of school days, I remember when my oldest (still five years of age) was in the school Christmas play and, still being on maternity leave with my youngest, I was able to go watch. Frankly he was crap. I mean, some kids are gifted actors right from the get-go, and then you get the kids like my son who should just move the scenery around, to be honest. He ended up being a "shepherd", muttered his lines with his thumb in his mouth and that was it - until he spotted me at the back of the room and shouted out "it's OK mommy, we've finished now - can we go to McDonalds?" and everyone burst out laughing. Happy days eh!