Last Friday my colleague invited me to join her for my first ever pub quiz! Yes I was a "quiz virgin" - but even though it was a heck of a trek for me, as it sounded like fun I thought I would give it a shot.

Her mom and dad had just arrived from Ireland and being the dutiful daughter that she is she got mom to baby-sit (on her first night and her birthday to boot) while dad came out to the pub with us for the quiz (though to be fair, mom loved the chance to baby-sit little-un as she doesn't get the chance to see him that often, of course). Anyway, dad's name is Charlie so our team name was - you guessed it - Charlie's Angels (I like to think we looked the part but that might be wishful thinking or beer goggles on my part)!

Anyway, it was well organized and well-attended, and was being held to raise money for a local refugee charity called "Foodkind". A lovely young Scottish girl gave a short presentation on how the charity works and a local (minor) celebrity DJ was the compere. Actually he was very good and sharp-witted (giving the team called "The Brexiteers" quite a run for their money).

To be honest, the questions were very much "locally-oriented" and maybe not quite what I was expecting, but then as the profits were going to a small, local refugee charity I suppose that should come as no surprise really. I mean, how many of you have ever looked at the UNHCR (United Nations High Commissioner for Refugees) website? Nah, didn't think so. Me neither. Oddly enough, it's amazing what you "think you know, but don't really", if you know what I mean, although I was quite chuffed at myself for correctly guessing the name of the third goal-scorer on the 1998 French World Cup winning team (well this is France after all). Still even though we didn't win (well didn't actually come close) it was good fun and Charlie was an absolute doll, so I think I will give it another go. Apparently Paddy's Irish Pub in the local town runs a quiz about once a month (where I guess the questions might be a little less specific) so I might give that a shot next time.

Then on Saturday night my friend and I were out again at the local GEDS (Geneva English Drama Society) presentation of Noel Coward's "Relative Values". As always, they do a wonderful job but I have to say how much I enjoyed the actual play itself - never having seen a Noel Coward play before. Very drôle! 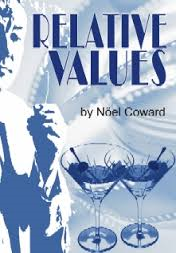 Actually, as much as I would like to fly into London or wherever to see some of these plays (and even though you can get some pretty good deals from here), being able to see these "amateur" performances has allowed me see theatre that I would otherwise never get to see, and I have had some really good experiences.

Actually they are putting on Puss in Boots for the Christmas panto. Don't think I will be going to that as it really is for young children but who knows - maybe when grandchildren come along ......! 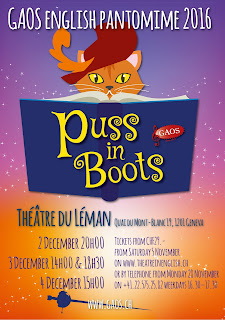