A bit more about Greece

I wanted to write a bit more about my trip to Greece when I got time as it was such a lovely trip and I think, out of all the "solos" trips I have done so far, possibly the nicest group. I would say the youngest was about 45 and the oldest was 85 (and he was an absolute blast). Charles, the 85-year-old, was totally with it and very drôle. He had a gammy left leg that used to seize up on him occasionally and he would wander off in an anti-clockwise circle in order to try to free his leg up. Seriously, he would just say "don't mind me, I'll catch up with you all in a minute" and then do his little circular dance until he got his left leg coordinated with his right leg again. That being said, he was still able to walk and more than kept up with everyone else. One day he actually climbed up to the top of a volcano (I didn't!) but on the way down he slipped and fell, hurting his ankle. That is no reflection on his age, by the way, he just slipped on loose shingle. So our guide shot off back to the boat and took all the ice to put on Charles' ankle. When someone on the boat asked for a gin tonic with ice the guide explained why they had no ice, so Charles took his sock off, filled it with ice and said "dip that in your drink"!

Another chap, a widower of around my age, was on his first "solos" trip and seemed a little quiet to begin with, but by the end of the trip he had really come out of his shell. One night we started talking about the stupid stuff that had happened in our lives and he was telling us about the time when as a young man he had just passed his driving test and his dad lent him his car. He felt like "Jack the Lad" driving round in his dad's car trying to look cool. One night he was pulled over by the police for a routine road check and they asked him to open the boot. Well John's dad was a greengrocer and when he opened the boot there were about 50 cabbages in the back! The cops, doubtless thinking there was something hidden underneath, proceeded to take out all the cabbages one-by-one and put them on the side of the road. Of course there was nothing for them to find so they jumped in their patrol car and drove off - leaving John to put all the cabbages back into the car and looking decidedly uncool!

Another, older John - Geordie John - commented one night that while Greek food was lovely you couldn't beat blackberry and apple pie with custard. So John No. 1 said - "oh you mean toenail pie"! We all cracked up laughing at that but seemingly his mother referred to it as toenail pie in reference to the bits of apple core that sometimes got left in the pie and "tasted like toenails" - now how would she know? Of course it could have been that John's mom had really dodgy hygiene standards but I prefer not to go there .....

I also hit it off with a 74-year-old lady called Cath and have given her my email address. I hope we get to keep in touch as she was such fun and it is nice to stay in touch even if infrequently. When I got home I spoke to my brother (who had originally been planning to come with me) and told him all about it. While I understand why he backed out of this trip I'm hoping that my latest experience will give him the courage to go out and do the same - somehow I think it will.

And a few photos: 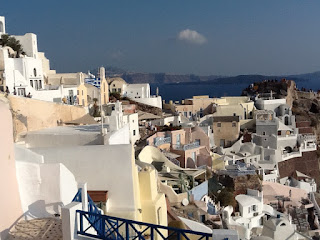 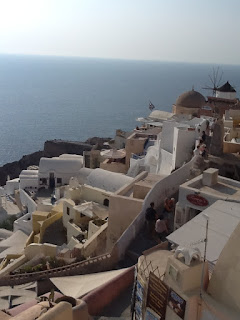 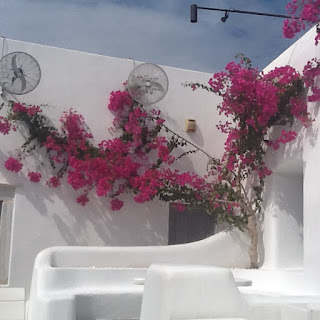 And finally, talking of my oldest son's engagement, he told me that he had asked his younger brother to be his best man. J's reaction was "oh shit"! Nuff said I think!