Getting rid of stuff

I was just reading (yet another) article on decluttering and while most of the articles are repetitive, for me at least getting rid of stuff is such a de-stressor. It's true what they say, getting rid of clutter also frees up your mind. I did read the majority of the ubiquitous Marie Kondo book on decluttering and while it makes sense I personally think she seems nuttier than a fruitcake, although she can't be that daft if she has made good money out of showing people how to fold clothes and declutter. I mean "you have to thank your stuff for its service and then let it go"! Maybe it's cultural but it seems a little over the top for me. That being said, I go with the basic premise of what she says.

In the last 18 months I had started to (slowly) get rid of some of my stuff. I suppose with my divorce and His Nibs moving out and taking what he wanted I inevitably got left with a bunch of stuff that belonged to him but that neither I (nor seemingly he) had any use for. 30-year-old US-bought video camera the size of a small apartment building anyone? A 30-year-old music recording studio about the size of Pennsylvania? All very nice stuff in its day but positively Jurassic now.

Then of course when he upped sticks and buggered off back to the States last June abandoning his three-bedroom rented farmhouse guess where the "stuff" went, on the premise that my youngest son might want said "stuff" some day?  If you ask me it was a good excuse to just lock the front door and leave it to the idiots left behind to clear up. Of course, all the stuff that didn't get taken to the tip was then stored in my rather large basement. My youngest did eventually move into a one-bedroom flat with his girlfriend last November and did indeed take whatever he wanted of his dad's, but of course that leaves all the other stuff still in my basement.

That's not to say I don't have my own junk of course - I do - particularly given that my home is relatively large and of course having a large basement what do you do - you fill it with stuff. So the next massive job on the horizon is to get rid of more stuff before it becomes necessary to do so. I would find it very stressful to try to do something like that in a short amount of time, so I really want to get on with doing this slowly while there is no rush. I have some lovely stuff too of course and the main thing has to be finding a good home for that. I have offered stuff to friends and family and put stuff on Freecycle. I will also try a couple of vide-greniers (car boots to all  intents and purposes) this year and what doesn't get sold will go straight to the charity shops.

The strange thing is, while you think you will miss all this stuff, once it is gone, for me at least, it is a case of out of sight, out of mind, and a feeling as though a great weight has been lifted. So now I guess all I need is one of these: 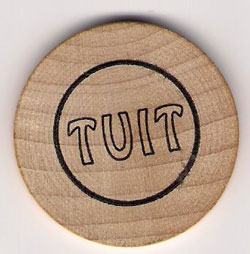