A few years ago I went home to England for a few days to see my family.  It was towards the end of September so the Hallowe'en decorations were already in the shops.  I LOVE all the ghouls and ghosts but here in France it hasn't really caught on that much - I'm not sure that I really want it to anyway because it would feel like a "fake" celebration (I mean, I know it's a "fake" celebration, I just mean as opposed to one I grew up with).  As I was walking round the big supermarket with my sister we could hear screams coming from over at the Hallowe'en aisle.  When we checked it out I have to admit I was in little piggy heaven - I love that stuff and it was so cheap.  Anyway, since I was going to be flying back home and not having a bottomless suitcase, I decided I had to restrain myself and only buy one "ghoul in a coffin" to bring back to France. 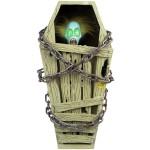 When you walk past it, the ghoul leaps out of the coffin and screams really loudly - I just loved it!

It was at the height of one of the more tense anti-terrorist periods so, being smart (or so I thought) I decided to take the batteries out of the ghoul and pack them separately.  The only thing was, the screw holding the batteries in place was really tiny and nothing I could do would get that damn thing out.  My sister, very helpfully (not), suggested wrapping the ghoul very tightly in my clothes before putting it in my suitcase assuring me that "that should stop it from screaming".  Yeah right!

I then drove the 2 1/2 hours back to London to drop off my rental car and catch the plane.  But OH MY GOD, as soon as I put my suitcase down on the moving walkway into the airport the bloody thing started to scream in my suitcase!  People were looking around but couldn't figure out where the noise was coming from.  On top of that, I was flying with Easyjet and the check-in line was really long - you know, you go round and round the little rope barriers forever just like as if you are waiting to get on a ride at bloody Disneyland.  Or maybe it wasn't taking forever but it just felt like it with my suitcase constantly screaming.  Now I don't embarrass easily but I have to admit this one really did a number on me.

When I got to the check-in desk I explained to the girl what was going on and asked her if she would like my ghoul as a present.  She said she wasn't allowed to accept anything so I decided I would throw the damn thing away - only to find out that all the litter bins had been sealed shut because of the security threat!  And I mean, the place was crawling with police officers armed with machine guns.  Bloody hell.  I wasn't sure what to do at that point so I decided to just break the back off the battery compartment, which, after much blood, sweat and tooth-gnashing I managed to do.  So I took the batteries out and stuffed them in another pocket in my suitcase and made my way red-faced but triumphant back to Geneva with my ghoulish trophy more or less intact.  And guess what, the bloody thing still works!  Great eh!