Is it just me or has anyone else noticed that the only way it would seem to be possible to separate some people from their mobile phones would be to have it surgically removed! Don't get me wrong, I am very grateful to have a mobile phone for convenience sake, and I understand absolutely that people read on them, listen to music or use the internet, etc. I don't have a problem with that at all.  I don't use my phone for those purposes because I cross the border from France into Switzerland every day and in order to use the internet I would have to enable data roaming (and all the expense that would incur, so I just don't bother).  But what I cannot understand is some people's need to be constantly on the phone.  I mean, can you think of anyone you would want or need to talk to 24/7 (I mean, while sitting on the bus, standing in line at the bank, sitting on the john?).  I can't so I find it very difficult to understand.  I'm not talking about teenagers who seem to feel the need to send sms to their friends 10 minutes after they last saw them - we were all daft, lovesick teenagers at one point I guess. I am talking about the adults who seem to have them attached to their ears by skin grafts and constantly feel the need to yell into them.

Every day I drive 28 km to the Franco/Swiss border, park my car and catch the bus for the 8 km ride across town to work.  Geneva being what it is, this usually takes about 40 minutes.  It gives me plenty of time to sit and read, daydream or whatever.  Many people listen to music under headphones, or read.  BUUT, there is always someone who gets on and has to have that oh-so-important conversation in the middle of a crowded bus while speaking at the top of their voice.  There is one man who sometimes gets on at the station and yells non-stop into his phone until he gets off about 30 minutes later.  I dread it when I see him get on.  Another is a Portuguese-speaking man who frankly doesn't need a phone as he could just as easily yell to whoever he was talking to - even if they were in Portugal.  And then another lady recently who had a really, really loud "chat" with someone for about 15 minutes.  When she hung up I'm sure I wasn't the only one who thought "thank God for that", but no, she then proceeded to have another really, really loud "chat" with another friend.  She is entitled to chat of course, but when you can't even think straight to read because someone is on the phone talking SOOOOO loud it is really bloody annoying.  I mean, if she at least put the damn thing on speaker-phone we could ALL hear the entire conversation, but NOOOO, we just get to hear her side.

I know I wasn't the only one annoyed by this as people kept glaring at her and when we got off at the terminus a group of us just burst out laughing in relief.  But you know, it isn't funny - it is damn well rude and inconsiderate.  I would have loved to have a fake, loud, imaginary conversation right next to her to see how she liked it .... but who needs the hassle - life is too short. 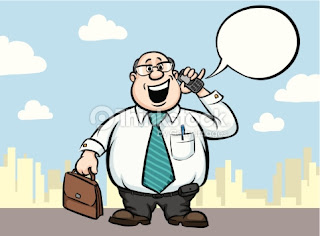 Then there are the people you are actually with who can never stop looking at their phones or texting. I got so fed up of this at a dinner recently that I asked the guy if he was waiting for a heart transplant! When he said "no, why" I said "do you realize just how ignorant it is to be constantly looking at the phone when you have been invited to someone's place for dinner"!  (I guess that means I'm off his Christmas card list now, eh).

On an only slightly related subject, my house backs on to a farm.  The farmer sometimes keeps cattle, raises horses and/or donkeys.  The cattle have cowbells on since during the summer months they take them up to higher pastures and bring them down in the autumn (it's called la transhumance in French - now that is something beautiful to see). 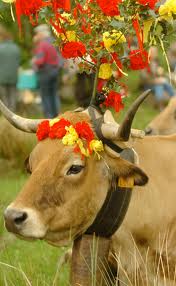 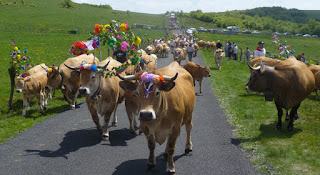 I have to admit when we first moved in and the farmer would call the cows down for milking the "dunk, dunk, dunk" drove me mad (but probably only because I wasn't used to it and 5 a.m. was just a bit early for me).  But I soon not only got used to it but began to love it (all the more so when they were further up the mountains and you could just hear a gentle thud, thud, thudding sound).  But, apparently someone complained.  Can you believe it.  I mean, if you live in the country that's what happens.  Donkeys, bulls, cows and cockerels make a noise (my vote goes to the donkey for being the noisiest bugger - just saying).  So for a while the farmer removed the bells!  All for the sake of some city-slicker who wanted the country without the inconvenience of the country!  I'm glad to say, however, that the bells were soon back (as Quasimodo might have said) and I love it.  Give me the bells over the mobile phone fiends any day!

(And just as another "by-the-way", since I started doing the park and ride to get to work, I have to admit I had never realized how many people smoke.  I put it down to me sitting on the bus day-dreaming and then seeing people waiting at the bus stop taking that one last drag before hopping on the bus.  But it truly shocked me for a while.  We all know the health risks attached to smoking, as well as getting the occasional, really pungent whiff of bad breath from the hardened smoker.  I have never smoked and have no idea how hard it must be to give up so I'm not knocking them.  But what I will never get through my brain is how, in this day and age, anyone can actually afford to smoke. Good Lord - I hate to think how much of their money is literally "going up in smoke").
Posted by Treaders at 15:28