Going for the minimalist look!

Move over Marie Kondo is all I can say!  So there you have it.  Two months after my ex announced that he was upping sticks and moving definitively back to the US in five days time this is what my basement now looks like! 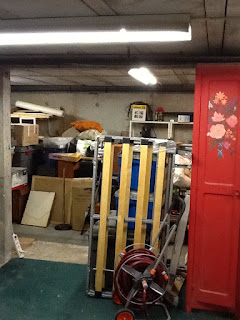 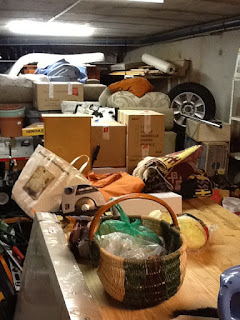 Great eh!  And I was just starting to get on top of things in my house a little!  I had emptied out one bedroom/junk room and dumped all the stuff into another bedroom in order to re-decorate, lay a new floor and put in "proper" furniture, rather than the temporary shelving that really is only supposed to be "temporary" but ends up staying there for - oh I don't know - 10 years!  You know the sort.  So inside the house was a tip and then this!

Since my ex left and went to the States (madly in love, gonna buy a house, yadda, yadda, etc., etc.) I have been going up to his rented 3-bedroom farmhouse and sorting and pitching stuff.  Now I know it's not my responsibility but since my youngest and his girlfriend are (eventually) going to move into a place of their own (please God), they will be taking some of his dad's stuff so it needed to be done.   Although frankly why I also ended up doing the 10 square metres of what was laughingly called the garden is beyond me.  BUUUT, I did it to help my kids out, not their dad.  Which also begs the question, why oh why did he have half a ton of expensive gardening tools in his man cave if he wasn't (ever) going to be buggered to use any of it despite the fact that he has been retired for 3 years?  Anyway, moving swiftly on, this weekend was moving day and this is just what some of my basement looks like (not mentioning the 2 fridges and washing machine in my garage)!

And wouldn't you know, the boys had rented a removal truck for the weekend but 15th August being a holiday in France the local tip was shut.  Bloody hell.  So now they are going back up with a mate and his van tomorrow to empty out what is left and needs going to the tip.  Cleaning for the rest of the week and then hopefully we are free!!!!

Hopefully now I can get back to my zen-like Marie Kondo state and start moving on with my own life.

And to think I have been divorced 3 years and still it never ends!