As I had mentioned in a previous post, one of the joys of being in a multicultural city like Geneva is the fact that you get the pleasure of being able to go to the theatre, concerts etc. in English, in addition to attending events in French.  While I do most of my interests/courses in French, it is also great to be able to see things in English from time to time.  So this weekend, a friend and I went to another show put on by the Geneva Amateur Operatic Society (GAOS), but this time by their off-shoot, the Really Youthful Group.  As the name suggests, the Really Youthful Group is an amateur group made up of young people up to the age of 18.  And what a wonderful job they did.  Of course, having such a classic comedy as Andrew Lippa's adaptation of the Addams Family really helps, but even given so, wonderful they were. 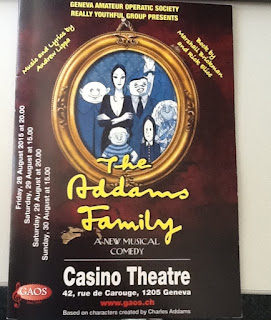 It is a brilliant musical, very clever, and the kids more than did it justice.  I have never actually seen the film (starring Angelica Houston I think) and don't mind at all as it was all the more of a wonderful surprise.  They weren't just "pretty good for kids" - they were pretty darn good by anybody's standards.  Where on earth they get the talent from beats me (speaking as someone without an artistic bone in my body), and on top of that having the nerve to do it.  Wild horses wouldn't get me on stage doing that, I can tell you.

What is really amazing is that these kids are, at a minimum, bilingual (English/French) and more often than not trilingual.  You can tell that just from the babble in the audience! Many of these kids are often temporary expats and are educated in international schools here in Geneva.  The majority are in the English section for that reason, with French lessons being intensive, although there are some of the longer-term Geneva residents who are educated in the French section, with intensive English.  On top of that Morticia was played by a beautiful Malaysian, Gomez was (I think) Spanish, and while I'm not sure of the other nationalities not many could be considered "English mother tongue".

At the age of 18 the kids then have the option of auditioning to appear in the adult productions (where there are fewer roles for kids of course) but many of them will then have finished their high school education and be heading out farther afield for their higher education.  But what a great time they seem to have had in the meantime.

All in all, I had a wonderful evening discovering a great musical comedy which was so well performed by truly talented young artists.
Posted by Treaders at 14:54