I went into Geneva yesterday to have lunch with some friends and on the way in my car "diagnostics" began to "ping", informing me that my headlight had just gone! Bugger! Once you cross the border there are three fairly long tunnels and I could tell instantly it was the right headlight that had gone as it was hard going in the tunnels! Anyway, I made it in to work in time for a very pleasant lunch, and then tootled off back home a couple of hours later in time, hopefully, to miss the worst of the traffic and the encroaching dusk. What I never thought about (until I got home, that is) was that I should have left earlier and dashed off to Ford to get them to fix it before they closed for the evening. But I never thought that far ahead and that effectively put the kibosh on my going to my Italian lesson last night as it means taking the back roads and what with the pelting rain and the darkness I didn't feel safe! Oh well, I'm sure I can make up what I missed in one lesson, although it was a bit disappointing not to go as I had actually done my homework you see!! Damn, and here's me being all Goody Two Shoes and all!

So this morning I had my third pilates class (it's beginning to grow on me - I wasn't sure at first) but instead of heading off to the market afterwards I ran down to Ford to have them replace the bulb before they closed for lunch. Now with my old car I used to be able to change the bulb myself but, seemingly, with this car it's more difficult so I knew I had to get down there before lunch as I had things to do in the afternoon.

After that I decided I might as well come home for lunch before heading off to do my grocery shopping so I was checking my emails when another bloody "scam" email came in - they are coming in thick and fast at the moment - you know, General X's widow who needs somewhere to stash millions of dollars in a foreign bank account! Since last week I decided I won't delete them any more but have created a word document with all their texts and emails in so as soon as a new one comes in I forward it to all the others. Little things please little minds I guess!

Anyway, while I was out shopping I received a message to say that a gift I had ordered for Jen's birthday could be picked up in town. Jen will be 30 on Monday so I thought it would be nice to get her, among other things, a copy of a French newspaper issued on the day of her birth. When I had a look at what they had, though, I wasn't too thrilled so decided to get her a copy of the Paris Match that came out the week of her birth. Now that it's arrived it doesn't seem to be the most exciting issue I've ever seen, but I guess there's not much I can do about that, is there! 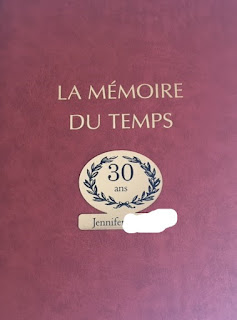 Then as I was coming out of the shop I felt a hand on my arm, and when I turned round it was the "kissy guy" I made an idiot of myself with at the market the other week - you know, the one I waved at thinking it was my neighbour and as he took his glasses off and went in for the kill (the kiss on both cheeks), I realized to my horror that I didn't know him!!! Anyway, it was him and he obviously recognized me from then and said he wanted to apologize!!! Err, actually I would say it was more my fault but hey, if he thinks he goofed I can live with that! So he said he wanted to apologize to me for his "lack of respect" the other week (in French it's perfectly ok to say "I showed disrespect to you" - in English it sounds a bit naff though eh)! He said it was disrespectful of him to shout "hallo gorgeous" across the road and then trot over to kiss me (and here's me thinking "any time bud, any time!") but I explained that I had mistaken him for a neighbour too so I'm sure we were both to blame! But guess what, he told me his name was Dominique and asked if he could buy me a drink!!!! Yikes!!! When I explained to him that I had a car full of groceries melting as we spoke, he said maybe next Thursday, if I was at the market, and he would look out for me!!! I suppose that leaves me a whole week to decide if I ever intend to go to our local market again then!!! Oh dear!
Posted by Treaders at 15:55