Getting my groove back!

I haven't felt much like experimenting in the kitchen these last few weeks. I just seem to have lost my mojo there for a while. I have always enjoyed cooking but lately? Nah, not so much! But the other day I pulled a pork roast out of the freezer and picked up a very old cookery book that had one of my favourite pork recipes in it and I realized that this book has consistently produced some of my favourite recipes! So I decided to sit down and flick through it to see what I had been skipping over all these years - I mean, you know how when you use a cookery book you tend to use the same couple of recipes over and over and never try anything else right! Well, I'm pretty sure I had this book with me when I first came to Geneva 40 years ago (yikes, 40 years!), its recipes are in ounces and lbs and the covers are hanging on by a thread. But, turns out it's still a great book. You just have to remember that one ounce is 28 grams and off you go!

So I spotted a rather nice looking recipe for cherry/almond squares, but since I didn't have any almonds I decided to substitute desiccated coconut (of which I had an abundance). They turned out rather like shortbread (with a glacé cherry on top) and at one trillion calories per slice they proved a roaring success! I also made a variation of Anne's (New Happenings at the Table) pumpkin and sausage soup, and it wasn't bad. I wasn't overly fond of the sausage I chose but it was still pretty nice. And then tonight I made a "dry potato curry" recipe also from my old book - now that I loved! One of the nice things about living on your own is that you can please yourself what you eat and it doesn't have to be a "proper" meal (shortbread and potato curry anyone?). It also doesn't matter if it doesn't turn out too well - but somehow this weekend everything seemed to turn out pretty tasty! Maybe I just need to take time out more often! When I was at the market on Thursday the fruit and veg vendor started handing me slices of clementine, kaki fruit, mango etc. to try (he knows a fruit-lover when he sees one), and as I was paying he came trotting over with a few avocadoes that were "right on the edge" and a couple of limes. Said it was better for me to use them up than for them to go off. I also have shrimp and chicken defrosting so I'm looking forward to experimenting a bit more this week! I'm glad I've got my mojo back, to be honest! I'll always remember one lady saying how she loved Christmas because she never had to think what on earth to cook that day - I think we all know how that feels don't we!

Then earlier this week I got an email from Engie, my new electricity company. I have always been with EDF but Engie had a young man going door-to-door in March trying to persuade people to switch in view of the fact that EDF were putting their prices up on 1 July and if I switched to Engie they would remain on the lower tariff for at least the next year. How long those prices stay at that level after that I don't know but I was very pleased to see that my monthly direct debit has dropped from €90/month to €72 already. Add to that the expected €30/month I should save (according to Max) by no longer heating my water with electricity and I will be well pleased as he said my new, more efficient heating system (let's face it, anything has to be more efficient than a 33 year old heating system) will supposedly not use more fuel even though it is now heating my water as well. We'll see I guess, but with potential savings of €50/month so far I'm pretty happy!

As I've said previously, I'm slowly trying to get my garage and basement sorted, as well as major cleaning throughout the house and putting the garden to bed and guess what - I'm finally starting to see some progress! I guess when you keep flitting from one thing to another rather than just sticking in one spot until it's done it's gonna take a while, but I'm afraid I'm not that way inclined - I like to "flit"! Either way, I am starting to see progress. I was just wondering how to overwinter my new lemon tree and bougainvillier when up on my Facebook feed popped a post from "Rustica", which seems to be a French gardening site, and the guy on there was "showing me how to overwinter my lemon tree". I have no idea how I ended up getting this on my FB feed but I'm rather glad I did as being French it's maybe more relevant to the weather conditions in my location than other sites! Without his expertise I think I would have made the mistake of bringing it into my house but apparently they can't take the dry heat and are better off left outdoors but protected from the cold!! So now you know!

While I was out in my garden late this afternoon putting another raised bed "to sleep" (i.e. covering it with compost and a sheet of weighted cardboard to keep the weeds down), my neighbour walked over and we were discussing the group of huge mushrooms (probably more properly called funghi I guess) which seem to have suddenly sprung up in my garden. Now, I routinely get a few mushrooms at certain spots on the lawn but I have never seen anything like these. We were saying, if they were edible they would be a little goldmine, but since neither of us knew much about mushrooms we decided to play it safe! 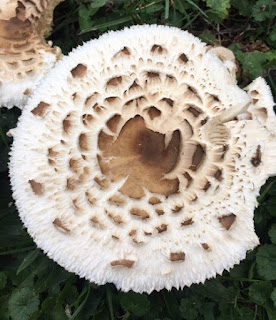 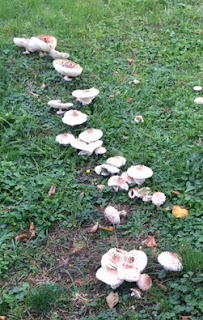 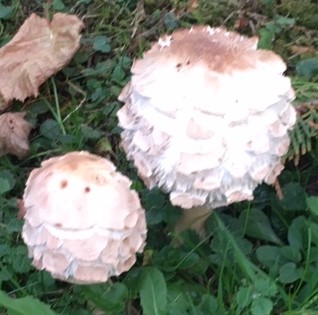 I had a quick "chat" with Mr. Google and they would seem to be Chlorophyllum rhacodes,
or Shaggy Parasols.

"The shaggy parasol is popularly praised as a choice edible mushroom. However, it contains toxins which can cause gastric upsets when eaten raw or undercooked, ...


Furthermore, young shaggy parasols look identical to the poisonous Chlorophyllum molybdites (the mushroom that causes the most poisonings in North America yearly)."


Nah, I think I'll give it a miss, just in case! But, while I was chatting away with my neighbour I noticed how lovely one of the mountains looked with the sun on it just before it set! Stunning! 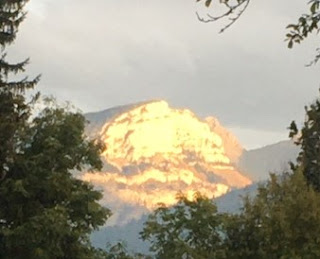 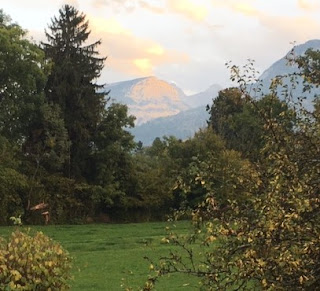 I also received an email the other day offering me a 15% discount on tickets for an upcoming Johann Strauss "concert". As a "frequent flyer" to such kinds of concerts it's nice to get these offers and as I like Strauss I sent a text message to my friend on the off-chance, asking if he fancied an evening at the theatre and I got a "yes, of course" back immediately! I nearly fell over, as I usually get a "we'll see, I don't know what my plans are" and so on. He must be feverish! Anyway, I jumped on it and we have now got tickets to see the New Year's concert on 9 January at the Hotel Kempinski in Geneva! 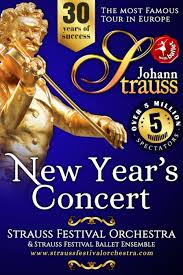 As the schools are on autumn break most of my classes are on hold for the next two weeks, although since we are all "old fogies" without school-age children my Monday night sewing club is still on. Other than that, I suspect the next couple of weeks will be quite quiet, as was this weekend, and I have rather enjoyed it. I very much enjoyed the England/Australia rugby match this weekend which I think England deservedly won, but there were flashes of brilliance from both sides, so a good match. That means that England now has to play New Zealand in the semi-finals next weekend (yikes - playing the favourites!), with Wales playing South Africa in the other semi-finals. So that's another great weekend's rugby to look forward to!

And on that note I'll love you and leave you. It's almost 11 p.m. on Sunday night here, it's raining and I don't have to get up tomorrow morning and slog my way in to work. Could life be any better!