The hip bone's connected to the thigh bone ...

Max (Jordan's mate and former boss) called me the other night to ask if they could deliver my new heating system ready for them to install next week. No problem for me as I can be here pretty much any time, so he reckoned he would be at the house around 8.30 a.m. I tend to slob around in my jim-jams when I get up so I made the effort to get up early and showered and dressed in good time. Nine o'clock, still no sign - they eventually showed up at 9.30! So I asked him if he was working on UK time (his new girlfriend is Welsh) but he said no, it was just "le petit quart d'heure Savoyard" (the little Savoyard quarter of an hour). Basically, that means, you'll see me when you see me! It wasn't a problem anyway as I was pottering around but I remember thinking "you cheeky little bugger". Actually Max has always been a "cheeky little bugger" since I met him when he was 15. He was always the one with the twinkle in his eye and you just knew he was up to no good. He used to come over to my house where "the band" would practice in my basement. Oh my poor eardrums (and oh the poor neighbours). Then I would inevitably end up driving him 30 minutes home because he had no way of getting back or giving him train fare because he didn't have any money! One new year's day when he was about 17 he called my house fairly piddled at around 4 a.m. to say he was in La Roche (our local town) and he didn't know where to go. My kids had already come home and I don't know how he thought he was going to get home so I asked where he was and went down and picked him up. Thankfully I don't like new year's eve and hadn't had a drink but …. Sometimes I could have wrung his neck but you know what, I like the little sod!

Now of course, he isn't so little (nor is he a sod anymore). He's 31 (I think) and he and his brother have taken over their dad's very successful plumbing business. Well, when they showed up my new heating system was a helluva lot bigger than I expected. The water heater unit alone weighed 90 kg and the actual heat pump unit weighed 180 kg!!!! Between the two of them they got the water heater down into my basement but there was no way they could lug the rest down so Max drilled a huge hook into the ceiling of my garage and set up a winch system to get it down there. Very impressed! 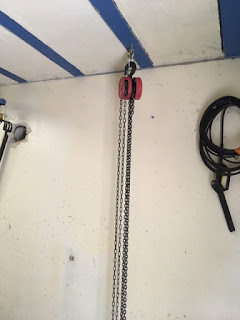 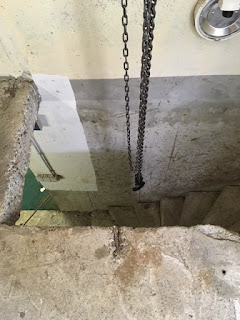 I currently heat my house with fuel and my water by electricity. The new system will have both the heating and the water heater running on fuel. I wasn't too keen on having the water heated by fuel but Max said it will save money in the long run, I won't be heating as much water (I don't need 300 litres a day just for myself) and that if it runs down the system will automatically start heating more water. My son had his doubts too but Max just said "you know what your trouble is, the B family (that would be us) are just so damn intent on keeping useless stuff" - to which I replied that that wasn't fair as he knew damn well I had divorced my husband 10 years ago! He just laughed as he knew my ex well (though not always with fond memories)!

Anyway, they worked all day setting it up and taking the old furnace away and will come back on Monday to start working on the radiators. In the meantime my house looks like a bomb has hit it as I have piled everything that was once in front of a radiator into the middle of each room to give them access (and will be leaving it that way until they have finished). But of course, that makes you look at the curtains (oh my God, when was the last time I washed them?). And then you look at the curtain rods, and the state of the windows! Everywhere I look something needs updating or painting. In fact I took all my curtains down and washed them and then I ran out today to buy new rods for downstairs - which I will install when he has finished with the radiators. It's like painting the Forth Bridge - a never-ending project - but at the moment I am quite enjoying it! In fact, when I was buying the curtain rods I spotted some rather nice floor covering, with a lovely sort of Arab-looking floor tile that I think would look nice in the kitchen. I had asked Max what I could use to strip my tiled floor downstairs and repaint it and he told me the end result wouldn't be even if I stripped and re-sealed it and it would probably be easier just to recover it (and he knew someone who would do it for me for the right price!!!). Now I respect Max's opinion because he bought an old farmhouse and renovated it himself after work and at weekends (with Jordan helping pretty much every weekend) and it is beautiful. Not bad for a young man of just 30-ish to have a beautiful home and a very small mortgage (actually, I'm hoping Jordan will be able to do the same thing once he gets better established). So there you go, idea after idea - I'm actually quite excited about it, although the new floor won't be happening just yet. Or at least, not until I can get all the other work done (and the money tree has started to bloom)!

The clean up/declutter in the kitchen is moving slowly on - I've emptied and "bleached" about half of the kitchen cupboards so I'm hoping I'll be able to paint it sometime soon, although trying to get the garden sorted and putting the garage back in order is also taking quite a bit of time. Like I say though, I don't mind and am actually quite enjoying it!

On the weight front, I'm pretty happy to be down 11 lbs since I retired and it seems to be staying off! Yay me! I used to go down and then up 4-5 lbs pretty much overnight but at the moment it's looking good! Not that it's moving much lower right at the moment but I'll keep hoping!

Oh and I see that they published the final jokes that were judged to be the best at the Edinburgh Fringe festival. I kinda like this one. "Some bastard managed to run off with my anti-depressants. I HOPE HE'S VERY HAPPY!" It just tickled me for some reason! The one that was voted the most popular was "I keep yelling out cauliflower, broccoli! Apparently I have florets"! So I decided to send them to my lovely chappie in New York with whom (see that - "posh English") I play words with friends on Facebook. While I was playing a game with him, though, FB "suggested" I might know S, whose sister, D, I actually worked with and who I see occasionally for lunch. No, I don't want to become friends with S as it happens, but by golly what a sight! She is probably knocking 80 (because her sister is 75) and she's all hair piece, false eyelashes, false nails and a shed load of make-up. In fact, she had posted a photo of herself next to a photo of a young Elizabeth Taylor!!!! Err sorry! Not! She's not the only one I know who posts photos "showing" how much she looks like a beautiful film star though - I just don't get it! To be honest, she looked more like Ru Paul than Liz Taylor but that might be just my opinion!


I might post a picture of me next to Danny de Vito - see if anyone spots the resemblance!

And talking of FB, another "friend" suggestion was the soon-to-be-ex husband of a cousin of my ex. I didn't really know this couple too well (although they did come out to France and stay with my ex a few years back) but they seemed nice enough. Last time I spoke to my ex-mother-in-law she said that the husband had "flipped" and seemed to be hell bent on drinking himself to death, so his wife had left him (I suspect there was more to it than just the booze, though, to be honest). Anyway, FB now suggested I might want to befriend J, the husband, so I had a look at his page to see what he was up to and my God, talk about putting it all out there! He is vehemently anti-Trump (nothing wrong with that in my eyes) but seems to be angry at the world and his mother. In half the videos he's posted he appears to be drunk or hungover, and he even posted something today claiming that the first President Bush was a paedophile and a Satanist!!!  Say what!!!! Even if I sincerely believed this stuff to be true, the hell if I'd post it on FB! In another post he ranted how three of the cousins had testified against him last year and had him sectioned!! Now knowing these three cousins I don't think there is a spiteful bone in their bodies so if they felt he needed psychiatric help I would believe them! Then there was a foul-mouthed rant calling one of the servers at the family restaurant every vile name under the sun and threatening her and her family. And today he posts a copy of a court summons ordering him to go and be finger-printed in connection with 11 accusations of stalking and harassment! And just when you think he can't keep going, he posts a photo of his hand with stitches in it because he had had to "break into his own, locked home!" After that (yes, it just keeps going), there was an article in the local paper about him and the complaints filed against him. Two people posted comments on that, one saying that he and his family were a bunch of stuck-up losers who thought they were better than everyone else even way back in high school, and the other saying that "in the interests of getting the true facts out there", why didn't he share that he had been kicked out of a church and asked not to go back, as well as quite a few other places where he was persona non grata! Lordy, lordy, it looks like J is in full "self-destruct" mode, but I can't for the life of me understand why he keeps posting all this stuff and airing all his dirty laundry in public! I hope he gets the help he so obviously needs, but in the meantime, I don't think I'll be FB "friending" him any time soon!