I was talking to my neighbour yesterday telling him about my plans to parquet over my downstairs floor. He made what I thought was a valid point that my flooring is actually pretty nice so why didn't I just try cleaning it up! To be honest, the living room/dining room area isn't too bad but due to a dishwasher having leaked all over my kitchen floor some time ago the kitchen looks pretty naff. So this morning I tried scrubbing it with soda crystals, bicarb, bleach, soap - you name it - but nothing  made much difference. An indoor pressure spray hardly made a dent in it either so I think I'm pretty resigned to getting a new floor (eventually). To be honest, what I've seen for the kitchen is (I think) pretty nice anyway but it will involve more expense and more hassle, getting all the stuff downstairs moved out the way. Still, it won't be for quite some time, so with that in mind I looked up the DIY classes that they have on offer at Leroy Merlin (a big DIY place here) and guess what? They do fairly frequent "lay your own parquet flooring courses", so I've signed up for one in October!!! Now I'm not sure I will go ahead and do it myself but who knows. I've also signed up for a course on how to "relook" furniture in September, which could be pretty interesting as I have a few pieces of furniture I wouldn't mind giving a new lease of life to! We'll see how it goes I suppose, but I honestly don't think "Tim the Tool Man" has much to worry about just yet (loved that programme)!

And today, my friend and I decided to go out to our first vide-grenier in a while. She ended up buying a very old wicker sunbed - you know, the kind you can just imagine Hercule Poirot lying on - and we were lucky enough to be able to get it in my car (we don't always think these things through properly)! There was also a chap there with a large table full of second-hand tools for sale, so since I don't have a crowbar and have often thought I could use one I picked up one for €7 and a rather nice hammer for €5 which was just the right weight for me and which I will be able to use to re-set the flower borders in my back garden! As I was putting them in my bag the guy's friend walked over and asked if I was planning to go on a burglary spree! Tee hee, I hadn't thought of that! Cat Burglar Annie here we come! 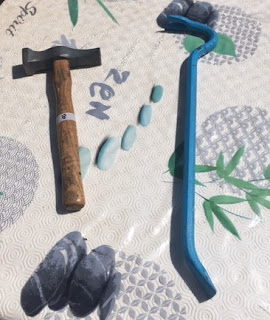