Why bother paying for "professional" advice!

And so, the ongoing saga of how much tax I will be liable for on my lump sum continues! I mentioned previously that I was expecting to pay 7.5% tax on my lump sum and then the guy I consulted on tax matters (before handing in my notice) dropped the bomb shell on me that there was another tax - called "CSG" - payable on top. First it was an additional 8.8%, then it was an additional 17.2%, then it was .... Lord alone knows!!! Eventually, based on what he had told me, I was expecting to pay 7.5% tax and an additional 8.8% CSG! Even with that "clarified" I still couldn't figure out the figures he sent me after our meeting. So I went back and forth with him, and a colleague - who is soon to be in the same situation as me - went back and forth with our local tax authorities, who basically told her my guy didn't know his a$$ from a hole in the ground! Anyway, I was supposed to be attending a pre-retirement course up at the International Labour Organizition (which I have now missed due to workload) and wanted to put this question directly to their expert so it would be sorted once and for all. With that in mind, last night I sent my guy an email basically saying, "I understand the €22,000 tax on the lump sum - no problem. I get the €8,000 tax on the pension - no problem. But can you please explain to me exactly where the additional €9,000 comes in!" And then, this morning, I get an email from him to the effect "well maybe the 17.2% isn't correct - you should check with the tax authorities when it comes time to do your taxes"!!!! What the flip! That is why I paid him isn't it - to get "expert"advice!

Anyway, in the meantime my colleague forwarded my exchange of email with this guy to the tax authorities who said that he had totally got his knickers in a twist and was quoting figures based on such things as tax charged on rental property income and so on - which is not my case!!!! The tax lady again confirmed that the only tax to which I would be liable on the lump sum would be 7.5%!!! So my tax liability went from €37,000, down to €24,450 and then down (finally?) to €11,250 (which was the figure I was expecting to pay from the very beginning) and all that in the space of about four emails!!! So, like a €25,000 difference from one email to the next!  This lady said she would be more than happy to speak to me but I don't have the time at the moment. I am working late every night and need time to get my thoughts together, so maybe I will stop in and see her after I retire, since the tax will only be payable in 2020!  What a bloody mess, and can anyone tell me why one pays for "expert advice" only to find out that he is no expert! I sincerely hope this lady is right (I think she is - she works for the tax office after all and it would seem to confirm what other people have told me) but really!!!!!!

In other news, I thought the ceremonies to honour the 100th anniversary of the end of WW1 were beautiful. Moreover it was sunny in London so it was more moving than usual, especially seeing the "old soldiers" marching by!  I don't usually like to bring politics up on my blog but I didn't believe even Trump could sink any lower - and then he exceeded all expectations by refusing to attend the ceremony in honour of the US marines who had died "because of the rain". Oh FFS!!!! Even assuming his helicopter couldn't make the trip, it was a one hour trip by car!!! I really, really didn't think he could sink any lower but .... he continues to surprise and disgust!

And talking of "idiots", my ex recently posted on FB a photo of two female military personnel in uniform with a caption underneath saying "can I get a thumbs up, a share and an ooooorrraaaaah for the good ole U S of A"!!!! Which was fine until somebody pointed out that they were Israeli solders! I mean, even I had spotted that but hey, if I ever go into stand-up comedy he would be comedy gold!

On a more positive note, a few months ago I bought four tickets to see the Glen Miller Orchestra at Geneva's Hotel Kempinski and what a fabulous evening that turned out to be. We are usually three friends who go to these kinds of event but I bought an extra ticket as a treat for my neighbour, since she had said ages ago how much she likes that kind of music. So on the Thursday night I went round to tell her that I had bought a ticket as a treat for her but she told me she couldn't go as she wasn't well!  Frankly she is (genuinely) never well and it is so sad to see. I love her to bits but I find her to be a very, very sad woman! She is (in her own words) an unhappily married woman, married to a domineering man. Now I believe you can only be "dominated" if you allow yourself to be dominated but after so many years married I feel she has had all the spunk worn out of her! Don't get me wrong, I don't live in that house and I don't know "the whole truth and nothing but the truth" but for various reasons I am inclined to believe her. Truth, of course, is subjective and that may be the truth as she sees/experiences it, but while her husband is lovely to me and always popping in to do favours and so on, I really do believe he treats her with complete contempt and disdain. He has had affairs in the past as a younger man and I think that marriage died a death then but I like them both. They are good neighbours to me but she is my friend.  The poor thing has spent her entire life living on cigarettes and coffee so she doesn't get fat because "M doesn't like fat women"!!! He doesn't??? Hey I've got a pair of knockers on me and they don't seem to bother him. My feeling is if my body offends you then don't bloody look! I won't go into detail but I have had occasion to put him firmly back in his place before and after he apologized for being out of line we are now back on a good footing. Anyway, as I said, the long and short of it is that she is a sad woman and a nervous wreck and I honestly think all those years of consuming cigarettes and coffee in a bid to stay slim are catching up with her. She is always ill with some ailment or other and a permanent hacking cough. As I say, I love her to bits but I honestly don't think she will make old bones!

The upshot is that she genuinely couldn't go to the concert so since her husband also liked Glen Miller he asked if he could use the ticket - no problem! So the three of us had an evening out with her husband (with her blessing) at a fabulous concert, after which we were literally "buzzing", they were that good. So, if you ever get a chance to see them and you like that kind of music - go for it, you won't regret it! 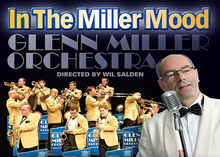