What a lovely family!

The other night I watched the first episode of  "Our Yorkshire Farm" on TV - a glimpse into the lives of the Yorkshire Shepherdess (Amanda Owen), her husband Clive and their nine children. What a treat that programme was! It was really, really refreshing to see such down-to-earth people living their physically hard but happy lives raising their "free-range" kids in such a happy home. They came over as so, so refreshing. This episode was filmed during the winter of the "Beast from the East" and you could only imagine how tough it must have been taking care of their animals in such physically demanding conditions. The Yorkshire Dales aren't easy to live in by anybody's standards but by golly, this was just incredible. What was so nice, though, was how they are raising such seemingly "salt of the earth" children. They all pitch in and all have their jobs but seeing them at Christmas opening what, to most of us, would appear rather small presents and enjoying them was a real treat. I also loved how Ruben (I think), the teenage mechanic in the family, showed his "shadow" (six year old brother, Sid), how to fix and mend and really took the time to look after and involve his little brother! I had read Amanda's book "The Yorkshire Shepherdess" and, to be honest, while it was an interesting read she really isn't a writer so it wasn't that great a book (in my opinion), but seeing them as a family in this documentary really was a treat and I look forward to seeing the rest of the series. 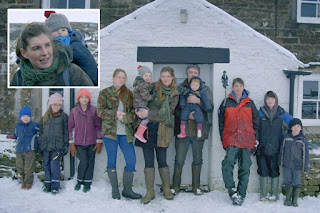 In other news, the protests of the "gilets jaunes" have now ended here in France, and not before time. "Gilets jaunes", or yellow jackets in English, was the name given to the nationwide protests throughout France against the increase in the price of diesel. Their first protest in my area was Opération Escargot (Operation Snail), where trucks went on a go-slow on the major arterial roads to bring traffic to a standstill. We always get clobbered as our little town is mid-way between the major cities of Geneva and Annecy so that was one day that I worked from home regardless of my director's opinion! Since then they have been blocking access to supermarkets, petrol stations and so on and while they blocked my local toll road "open" - i.e. nobody paid - they closed six of the eight toll booths so traffic was drip fed into those two (admittedly free) booths! Well not free for me actually, since I have a monthly contract and it will be debited from my account anyway. I have mixed feelings about these kinds of protests (and the French are very quick to strike/protest). On the one hand I understand the plight, particularly of the truckers, who will be having to pay more and more just to be able to work. On the other hand, as I said previously, it seems to me that they are always protesting/going on strike over something or other. Even if you gave me free tickets there is no way I would fly into or out of Paris over Easter - you just know someone will be on strike and your trip will be buggered!

And moving on, since I am now working 50% up until my retirement date I took a trip down to Cluses yesterday afternoon as I wanted to pop into the Yves Rocher shop (I love their stuff) and also to stop by my patchwork teacher for some tips about finishing a project. I wasn't going to sign up for more lessons this year as I knew I would miss the first few because of work, but it turns out that the lessons are late starting and will begin only on Tuesday 4 December so I have signed back up again. After that I will be retired anyway. We will be making a Kaffe Fassett mystery quilt, and since quilts are my favourite projects to work on, here I go again. It was sunny when I pulled into Cluses so I stopped to take a picture of the mountain ahead of me. Not that the photo does it any justice but it really did look so pretty. 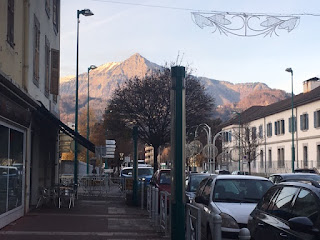 On another note, and not related to anything, as I was waiting for some rice to boil last night I decided to use those few minutes to start pulling stuff out of the fridge in order to clean it. Hey, have they discovered penicillin yet? They have! Damn, I thought I was on to a good thing. I tell you, some of the stuff at the back of my fridge should be in the British Museum! Yuck!

Oh, and remember my trip to Sicily? Well while I was there I kinda palled up with a lady called Carol. Anyway, we ended up Facetiming each other the other night for a gossip, and all being well she will be coming out to visit me sometime after I retire. Nice eh!

And finally, jumping from one topic to another, I was talking to my son, the plumber, on Saturday night at our board game evening and he was telling me he really doesn't like his new job much. He said all he does is takes the front off boilers, checks them over and repairs anything that needs repairing, and puts it all back together again. On occasion he has noticed small plumbing jobs which he could easily do for the client but he is not allowed to! And even if he decided to break the rules and do them anyway, his firm have him on such short turnaround times that he wouldn't have the time in any case. So he has started looking at jobs which would get him back into real plumbing. I was telling him it would be good to think about trying to get the tools so he could go out on his own at the weekends - but as tools are really expensive that will have to wait for a while. If and when he does decide to work for himself, I told him he should get a van like this one - it is just my sense of humour (and his to be honest) and it would definitely get him noticed! 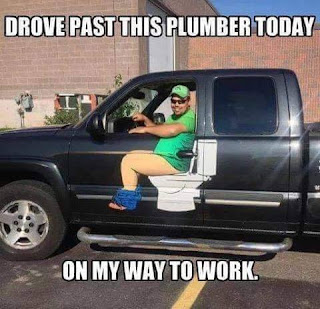