I've been missing in action a bit lately as I have been so frantically busy for the last few weeks, even arriving home between 9.30 and 10 p.m. on occasion. I genuinely don't mind because I know when it's coming and there really is quite a feeling of satisfaction when these big reports are published. That being said, it is nice to slow down a little - and get this - as from now I'll be working 50% until I retire and it's bliss! Actually having a life outside work is heaven - who wudda thunk! Oddly enough my boss called me a couple of minutes ago panicking slightly as they have just issued the vacancy for my post and he is worrying about who will (or won't) apply - will they get the right fit work-wise and personality-wise (as there are some "tricky" personalities here too. In all truth I only seem to be able to handle that aspect of it because office politics just goes straight over my head. I seem to be able to just tune it all out - which mostly is a good thing but not always). Oh well, not my problem now.

So where was I? Oh yes, well a lot has been going on too since I last posted. My friend and I finally got round to going to see A Star is Born last week and both thoroughly enjoyed it. We are no longer a couple but still friends and I really enjoy his company. I asked him if he wanted to sit at the back of the cinema and snog but he turned me down! Damn, I can't even get lucky with a 73 year old! But, like I say, we both thoroughly enjoyed the film and I was just amazed a what a lovely voice Lady Gaga has. I had never heard her sing before but it was a real pleasure to listen to her. Moreover, although she doesn't have a conventionally pretty face, I do think she is very attractive - probably more to do with talent and personality - but then, isn't that what it's all about!

Then this last Friday a couple of friends and I went to see the Geneva Amateur Operatic Society's production of "Breakfast at Tiffany's" and sadly, for once, we were disappointed. My two friends just found the play weird. I didn't mind the "weirdness" but was totally transfixed by a colleague of ours who was appearing in it and who was, frankly, totally crap, and it took away the enjoyment as I kept concentrating on her. So, by mutual consent, we left during the interval (we had a one hour drive home in the pouring rain anyway). Still, we regularly support this association and they are usually very good - but not this time sadly!

Then the following night we had our monthly board game evening at my former neighbour's. She lives at 1,200 metres so we had to play it by ear whether or not we would get up there in the snow but it turned so mild (still is) that all the snow had melted and it was easy going. In a fit of inspiration (to my weird little mind at any rate) I had seen some "piggy back morph suits" and ordered two for my sons for Christmas, plus one for myself just for the hell of it. They don't read my blog so I'm not giving anything away here. So I thought "what the heck" and decided to go to the board game evening wearing mine, and very fetching it was too (errr not!)!

Towards the end of the evening I happened to mention that I was playing "Words with friends" on FB with a gent in New York so my son decided we should all send him a "hi from France" message (we'd had a few at this point). He was delighted! 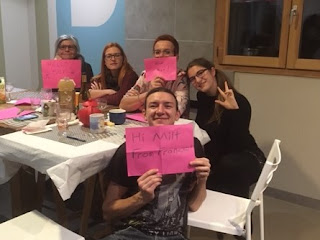 And moving seamlessly on, earlier this week I had my "exit medical" at work with a charming, older, replacement doctor. There wasn't really much for him to do as I had already seen the doctors I was most interested in seeing privately and had any reports he might need. I did ask him to put the exchange of correspondence with my Director on my file, explaining that his intransigence on my (and all of our) requests for occasional telecommuting arrangements was the reason I had resigned in the first place. It is too late for me but maybe it will help someone else! When I asked the nurse for a copy of my vaccination records she realized that I hadn't had a DTP shot in 20 years so offered to give me one there and then to bring me up-to-date! Why not - free vaccines! Buuut it's amazing how soon you realize just how many people actually thump you on the arm when they say hallo or goodbye! Damn that bugger hurt - but I was very brave, you'll be glad to know - stiff upper lip and all that!

Then, a "funny" during the week. I was targeted by a hacker on my work email. Someone who said "Treaders - email ......., password Thierry" you have been hacked. They have obviously somehow got hold of a partial password at some point because I tend to use Thierry-something as my password. Anyway, unless I wanted them to "out" me as having surfed pornographic web sites using my work's computer (ha ha!!!!) I had to pay $900 in bitcoins into their account or else! And it was no use trying to change my password as they would intercept each and any change from now on! I must have received about 15 of these emails in the last 10 days, so I just forwarded them to our Informatics people and wrote back to "superhacker" and told him to stick his demands where the sun don't shine!

And finally, all the Brits working in our organization have been invited for drinks next week with the British Ambassador. I don't suppose for one minute we will get any updates on Brexit so in which case I really hope it's gin and tonic time and not cucumber sandwiches and a cup of tea!