Throwing down the gauntlet!

In my previous post I was talking about my latest gung ho decision to get into some kind of shape and lose weight. I have been thinking for some time that apart from the weight gain that seems to blight most women at menopause, I am pretty sure my love of fruit (and all things fructose-related) might have something to do with my weight gain. I know fruit is good for you but apparently the fructose can really play havoc with "insulin response" (I couldn't explain that all technically if I tried). I had been debating leaving the fruit alone to give it a try and this week I have done just that. It was difficult the first couple of day, what with all those beautiful peaches and nectarines at the market, but after seven days I am not craving it quite so much. I then decided to re-watch the Fixing Dad documentary (I have mentioned it before) and on the strength of that documentary I bought the book and re-read it last week. It's a very easy read and combining that information with the very-easy-to use "Myfitnesspal.com" it was quite an eye-opener for me to see just how much sugar I was getting through, even when, apparently, the calories were quite low. MFP recommends keeping to under 45g of sugar a day and I was going waaaay over that. So I have had to have a total re-think on that one. My first weigh-in will be on Monday so we'll see how that goes.

I had also mentioned previously that I wanted to start getting out and exploring again, so when we had the post-wedding brunch in a small hotel about an hour from home I picked up some of their touristy info available in the reception. I had seen a leaflet on a waterfall called Cascade de Seythenex not too far from here which was located right next to a grotto. So a friend and I set off not really knowing what to expect but all equipped to "hike a little" and explore.

Thankfully I wasn't expecting too much (and so I wasn't disappointed) but the waterfall was quite small and the grotto -  had we not been held back by the guide having to give explanations in both English and French - we could have done the whole thing in 15 minutes!  Oh well, at least we made the effort. That being said, it was a very pretty little spot and a glorious day so we didn't actually "lose out". 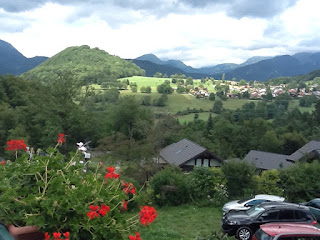 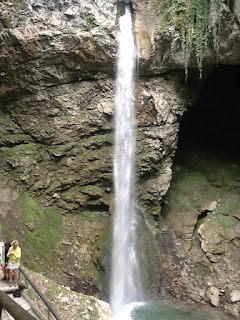 Since I have a somewhat Gary Larsonesque sense of humour I thought the photos inside the grotto came out looking much like what an ear, nose and throat specialist much see every day! Well, actually, I have a pretty dirty sense of humour so that wasn't my first thought - but I'm trying to keep it classy here (fat chance)!  So while the waterfall and the grotto weren't exactly that exciting, coming back along Lake Annecy we took the lake road rather than the highway and I had my first, ever view of Talloires, which is at the opposite end of the lake from Annecy itself, and it was beautifuil! It is just a small town, as opposed to the tourist magnet which is Annecy, and I just loved it. 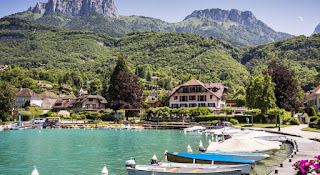 When my brother came out in May and we took the dinner/dance boat trip on the lake, it must have been Talloires that they was all lit up at the far end - and very lovely it is too. I have to get my backside into gear one weekend before the weather turns and get back down there - I mean, it's only about 90 minutes away!

And finally, an old friend from my first days here in Geneva called to let me know that she had bought tickets to the "Simply Youthful Theatre" (the under-18s anglophone theatre group here in Geneva) and did I want to go (she still supports them because her daughter used to be involved with them)?  You can tell we're getting old because we actually went to the three o'clock matinée!!! but that was intentional as (a) it wouldn't be so crowded (this particular theatre gets extremely hot) and (b) we had time to go out to dinner afterwards and have a good old chinwag.

They were performing "Legally Blond". I had never seen the movie because it just wasn't the kind of thing that appealed to me but while it wasn't the best performance I have seen this group put on (that accolade is still unbeaten by their performance of The Addams Family), they were still very, very good, with the young Reese-Witherspoon lookalike hamming it up for all she was worth. Well done indeed kids. 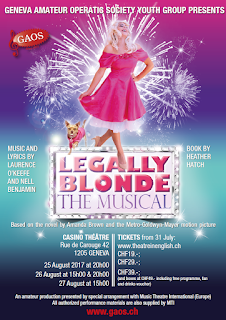