The appearance of wealth!

I was just talking with some colleagues about a couple of vacancies that had come out, who had been transferred and who had retired at the end of the year and so on. One colleague mentioned that X was no longer working as a driver and had been moved to another department and couldn't understand how that had happened. As I had worked in HR for over 20 years I explained that sometimes people had other qualifications/skills that they either brought with them or had developed over time which allowed them to move up. So this colleague then commented on how he didn't know how X and his wife (she works here as well) managed because X always had new, top-of-the-range cars and so on, and neither of them "were the sharpest knife in the drawer"! So this led to a whole big discussion on how an outward show of wealth does not necessarily indicate real wealth - usually the opposite in fact (says me, trying to kick my €10 bag bought in Turin market under the table). But I agree absolutely, so many people have to have the latest "designer" bling and run up thousands in debt to get it. In fact a colleague of my ex had got himself into so much debt that my ex, as his supervisor, was called in to try to sort it out (big joke that is)! Ex couldn't sort his way out of paper bag financially! I am so much better off with only half the income but no ex - but then I digress. Anyway, ex's said colleague had a fair income for a single man with no dependants, but he went out every night to the bar, eating and drinking, doing the same at lunch-time and then sometimes couldn't pay his rent - you get the idea.

I had been mulling the idea of advertising or even "subliminal persuasion" over my mind for some time. Geneva is obviously a pretty wealthy city and on my journey in to work, once I catch the bus at the border (with my musings and €10 bag for company), I go past a few high-end shops in the centre of town - Gucci, Louis Vuitton, etc., but there is one advert outside a shop that I absolutely hate. I have no idea why it bothers me so much but I think it is so lame and no way would it persuade me to part with my money (even assuming I had that kind of money - which I don't). I can't say their stuff isn't good or quality or anything like that - I just hate the ad! 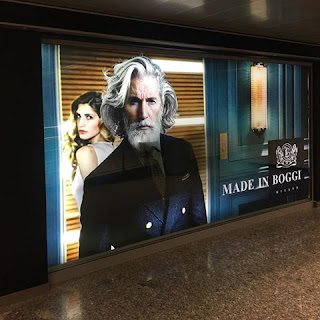 I think the guy is supposed to look like some sexy silver fox (obviously with money) and so appealing to the young, beautiful woman behind him. I personally think he looks like the Lion King's geriatric granddad and I think that's what bothers me. All their ads seem to show some suave, sophisticated man being "adored" from a distance by some insipid waif. It just gets on my nerves, I suppose.

Talking of irritating adverts, the worst I can think of at the moment is that bloody awful Moneysupermarket.com ad! I think Sharon Osbourne actually appears in it too but I can't bear to watch it through to the end!

Which then got me to thinking about what some people will do for money (or more to the point, what won't some people do for money)? Like these bloody awful reality TV shows (cue raised eyebrows, startled look, dramatic music and tears), Real Housewives Of Fill-In-The-Blank, Keeping Up With The You-Know-Who-You-Wished-You'd-Never-Heard-Ofs, I'm A Celebrity Watch Me Chew On A Piece Of Camel's Ass etc! I have never sat down and watched any of these programmes but have come across them, on a few unfortunate occasions, while channel hopping, and I can't believe my eyes. I mean, once you have had sex with a total stranger on TV what does the next person have to do to top that? Just how vulgar do you have to be, or how low do you have to go to "win"? Beats me. I suppose the film Indecent Proposal really put that idea out there didn't it?

Now I'm no Demi Moore (never was, never will be) but after my ex left I briefly dated a very wealthy Spanish lawyer (Mr. Testosterone Plus - great fun for a while but not in the long run). One day he asked me how much money I had to borrow to buy my ex out of the house. After I told him he offered to pay it off for me!  I just laughed (because he was obviously joking right?) but when he said it a second time "because I have given more money than that to the Prado" (and after I had picked myself up off the floor) it took me about three seconds to say "thanks, but no thanks"! He couldn't believe it (and neither could I frankly) but I had to explain to him that you can never put a price on freedom and I value mine too much! Although we have since split, I think that may be the reason we've remained friends to this day. No amount of money is worth giving up your independence for - it's worth more than gold dust!
Posted by Treaders at 14:28