Beginning to get the hang of this exercise malarky!

Five weeks in and I think I'm beginning to get the hang of this business. My weight is not down as much as I would like despite the fact that I have been counting calories as between hormones and water retention my weight still tends to go up and down like a yo yo. Still the general trend is down so I guess I need to stop myself chomping at the bit. Last year I had some credit with Amazon so I bought myself the cheapest fitbit I could find that would sync to my phone, and I have to admit I am loving it. They say you should walk at least 10,000 steps per day for optimal fitness and my fitbit really brought home how sedentary I was/am. I guess on an average work day I am hitting around 5,000 - 6,000 steps, so in order to hit the 10,000 I need to hop off the bus 30 minutes from work and walk in and walk at lunchtime. A tall order some days, although to be honest once I have got my backside into gear I have enjoyed it. The trick for me is not to look up too much when I am going uphill as it is a bit soul destroying to see how far you have to go yet. I have to admit though it it is getting a little easier - not a lot, but we're getting there. Walking in in the mornings also brings home to me how slow I walk. Seriously! Even when I was young and relatively fit I was always a dawdler and not much has changed, although I'm told if you take your hands out your pockets it does help you speed up!!

When we lived in D.C. my ex and I didn't get to spend much time together since he worked nights and weekends and I worked the opposite schedule. When we did have some time, however, we liked to go to Washington zoo, where I think my favourite animal was the sloth! And don't get me started on Sid in Ice Age - what's not to love? They are so cute and seemingly laid back, so maybe that is where I get my dawdling tendencies from! 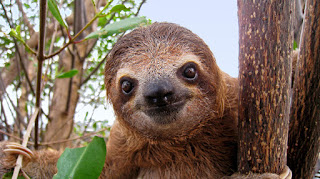 Anyway, this morning a Tunisian colleague caught the same bus as me so I made him hop off the bus on the Mont Blanc bridge with me and walk in - well I got to run alongside him as his legs are much longer than mine. Imed is a great friend and always good for a laugh, so it was a pleasure to get a chance to chat to him too. We met many years ago at work when he had come into my office to help a colleague with her computer. All of a sudden there was a loud "ping". My colleague didn't notice but Imed did and looked up. Seemingly my bra had finally admitted defeat and the strap broke, flinging a plastic bit out the top of my shirt. Imed looked at me with a "what just happened" look on his face, so I waved my bra strap at him. One big, cheesy grin from him later and we have remained great friends to this day!

It is weird though being able to go out walking over here when I see the damage being done by storm Doris in the UK and Ireland. The weather was supposed to break here today but it really hasn't. A little rain (snow in the mountains - always welcome at this time of year) and that's it apparently for the next week or so. Long may it last, is all I can say is I love spring.

Talking of "springs", the subdivision where I live is called "Fields of Song" in French not, as I originally thought, because of the bird song, but because we have loads of underground springs which apparently "sing" as they make their way down the mountains. Well since several of us homeowners bought the small plots of land behind each of our properties recently in order to prevent an access road being built if ever the field behind the houses is sold for construction, some of the neighbours have laid pipes through their land in order to channel the springs properly and keep the water off the road when the heavy rains come. I haven't got round to doing mine yet so at the moment I have a spring flowing through my veggie plot, which is fine if it is contained, but I guess I had better get moving on that too, unless I want an impromptu swimming pool appearing!

And finally, a small group of us at work run a second-hand bookshop, the profits from which are donated to various charities of our choosing. I am the treasurer and last year, for instance, a Peruvian colleague asked for 500 Swiss francs to take to Peru where her chosen charity was able to buy two wheelchairs with that money (you certainly wouldn't get even one wheelchair for that over here). Anyway, Yoli also collects plastic bottle tops which she takes with her when she goes home to give to the same charity since she gets $250 for every 250 kg of plastic! So yesterday as I took a plastic bag of bottle tops up to her office she laughed as she told me that last time she went home she was entitled to take three suitcases with her, so she filled one completely with bottle tops - and then got stopped at Peruvian customs! The customs officers told her they thought they had seen pretty much everything, but Yoli proved them wrong! I am very interested in recycling, organic farming etc. and would love to get involved with a Transition Network group but have yet to find one locally. But the thought of French bottle caps being lugged to Peru to end up buying wheelchairs for a charity definitely appeals to both my sense of good husbandry and irony!
Posted by Treaders at 15:57