As I mentioned in my last post, we had a celebration lunch for my youngest son and his girlfriend on Saturday and this Sunday we have the "getting-to-know-the-future-in-laws" lunch for my oldest's engagement. I'm looking forward to it (Lily was telling me how excited her mom is that her only child is finally getting married - they've been together nine years). They are aiming to get married next July but the younger two will be getting married "when they can afford it". It speaks volumes of course - weren't we all broke when we got married? But not necessarily unhappy because of it!

That got me to thinking about my sister and her husband. They had been married a few years when their first daughter came along. Then of course the whole "buy a house", "need a car", "down to one salary" business happened. Things became tight. My sister quit work when she had her daughter so they were indeed down to one salary and money was not exactly growing on trees. But, having a baby, she also needed a car to get around, so having a fair-sized mortgage and next to no money they ended up buy her an old Daf! What a clunker! More like a sardine tin on four wheels powered by a large elastic band!

Anyway, she came over to mom and dad's one night in her "new" car and offered to take me out for a spin in the old bone-cruncher. I was a teenager and had just gotten out of the shower but she said "no need to get dressed, just put a towel on and your dressing gown". So I did! How bloody mad can you be. Here's us tootling round our housing estate in her old clunker with me just dressed in a towel! The very next time she came over in that car with her baby the bloody thing broke down. I know it might be selfish but I'm so glad she broke down with the baby in the car rather than me in the "altogether"! That would have been a fun walk home!

But the best one was when they bought an old clunker that ran on cooking oil! I would never have believed it but it did in fact run on cooking oil! So what did they do - they went up the local chippie and bought his used oil for a lower price! Every time she drove off in that thing the whole blood road smelled of fish and chips!  They didn't keep it for long and have since moved slightly more "upmarket" - but happy days eh! 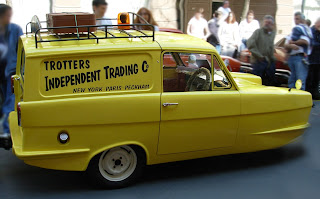