As I mentioned in a previous post, I am a great rugby fan and love to watch the internationals in particular. For a while, my second son and I were members of the England Rugby Supporters Club and would travel to a match if possible. One particular match, in around 2003 I think, had England playing France in Marseille, so while it was a good trek to get down to Marseille, we were lucky enough to have friends who live in Cavaillon and who were kind enough to put us up the night before.

The nice thing about rugby (apart from the game of course) is the atmosphere and camaraderie, so at a rugby match you never have supporters segregated like you would at a football match - which is the way it should be for heaven's sake - it's supposed to be sport! Anyway, Jordan was about 10 at the time, I would guess, and he and I went to the match in our England shirts but ended up sitting right in the middle of a huge group of French supporters. We could hear them ribbing us in French of course but it was all good natured and we didn't let on that we understood every word they were saying. The look on their faces when this little boy turned round and answered them back in perfect French was sheer bliss!

Now the cockerel is the symbol of France, hence "le coq sportif", and at one particular break in play, when the trumpeters started up, the man sitting next to us pulled a live cockerel out of his backpack and it started crowing like crazy, probably relieved to be out of that bloody back pack.  Was it cruel - probably - but the cock didn't seem to be too much the worse for wear (unlike the French supporter), but it was indeed pretty funny. 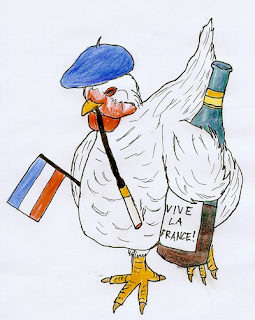 When Jordan was about eight he and his friends joined the local rugby club - Rugby Club le Môle, named after the local Môle mountain.

Anyway, Jordan and his friends were only young and it was a great way for them to socialize and get plenty of exercise, and while the parents do end up running around like crazy to get the kids to matches and practice, the atmosphere is always great.

One year, "pap" and "ammie" were over from the States and we took them down to watch Jordan training. It was a scorching hot afternoon so we tried to stay in the shade near the buvette (the little drinks stand). This being France, they didn't only sell coffee and soft drinks, but also wine, beer and probably a few other things hidden surreptitiously behind the counter! So my husband, "pap" and I had a couple of beers, much to the disapproval of "ammie". After a while, of course, I was bursting to pee, so I tootled all the way over to the other side of the grounds to get to the locker rooms, only to realize after I got there that they were locked - of course! So I had to tootle slightly faster back to the buvette to get the key off old pappy behind the bar. Again I tootled back, this time somewhat more urgently, key in hand, and began looking for the loo, only to be horrified at the sight of what are called "toilettes turques" here - I hate the bloody things. I mean I really cannot see any point to them at all and being a woman makes it even worse! 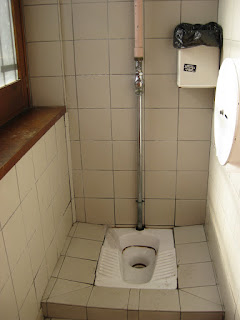 Anyway, I was desperate so after a bit of acrobatic manoeuvering I managed to pee, keeping my feet relatively dry and not falling down the hole. As I got up I grabbed hold of the chain to flush it - and got completely soaked from top to toe! As you can imagine, I didn't really know what to do except trudge my way back to the stands to puzzled looks.When I told my son what had happened he burst out laughing - apparently I had peed in the main shower - the first shower that they go into fully clothed when they are really muddy to wash off as much crap as possible, before stripping and getting into the "real" showers! The toilets were off to the right!

I said before that "ammie" didn't approve of us drinking beer - well she was even less impressed by the state of me when I got back from the loo, I can tell you. Perhaps one too many?

Jordan eventually quit rugby after breaking his collar bone for the third time. His friend Daniel went on playing and is now a young man mountain playing professionally for a local club. I was lucky enough to watch him play on Sunday as the match was on TV and I have to say I am pretty impressed - but then I would be wouldn't I!

Anyhoo, moving seemlssly on, I saw the sad news that comedian Ronnie Corbett had died last week, and while I can't say I was a particular fan, I will leave you with one of his "one-liners" that had me tittering.

"It has today been reported that a van carrying 10 prisoners has collided with a cement lorry on the M25. Police have been warning people to be on the on the look-out for 'hardened criminals'!