Do not try this at home!

My oldest sister is eight years older than me, so was a teenager in the swinging '60s and '70s. Mini-skirts were all the rage and M was very fashionable.  I mean, it's only to be expected of a young girl earning her first salary while still living at home. She was always right up to the minute fashion-wise.

As a family we got on well with our neighbours, so one day, as my sister was going out for the evening wearing yet another new outfit N, the husband from next door, decided to follow her down the road pointing out to everyone that she was wearing her new clothes. She was really embarrassed and furious with him so decided to get her own back.

She was quite the joker and working in central Birmingham she had access to several joke shops in the city centre. So she bought some trick soap and climbed over the neighbours' fence (with his wife's blessing) and put the trick soap in the soap dish in their bathroom.  Now N had really short hair - he always kept it more or less crew cut - so didn't really bother with shampoo so much as just run a bar of soap over his head while showering. Problem was, the trick soap had blue ink in it and the more N slathered on the soap the faster his hair and face turned completely blue!

As you can image, the women were all roaring laughing, including N's wife, despite the fact that they were supposed to be going out later that evening.  This all took place at the beginning of November and since 5 November is Bonfire Night or Guy Fawkes Night it was one of the few nights of the year where people would have had fireworks in their homes ready for the Bonfire Night celebrations.

So N leaped over the garden fence yelling for my sister.  She took off running as she could see by the look on his face that he was furious.  He caught her up at the top of the path near a lamp post and somehow managed to tie her to it with the rope that he had grabbed for the purpose.  Then, in an act of total madness, he ran into his house and got some fireworks (bangers we called them), put them down by her feet and lit them!  Total madness I know. Anything could have happened and she could have been hurt but I guess you have to remember that this was about 45 years ago and in all honestly the bangers probably weren't that great shakes - more of a slow fizzle and pop but nevertheless .....  Anyway, what happened happened. N died some years ago and my sister laughs about it to this day but I guess that taught her a lesson not to mess with N. 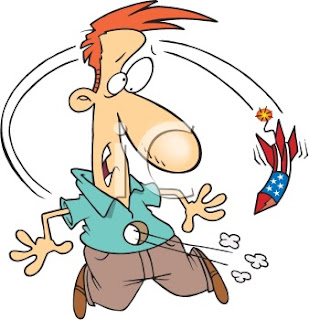