I see it's over two weeks since I posted but even though I've been somewhat busy, things haven't been that exciting so I guess there was not much to report really! I fell into a bit of a slump for a few days the other week and got very little done, but I've come to realize if I allow myself that slump it only takes a short while for the energy to get going again. I've always known I'm a tortoise rather than a hare, so I guess it's best to go with your natural flow, isn't it!

So what's new, apart from the fact that my ex has been and gone. As I said previously I didn't think he looked very well when he arrived, but that could initially have been put down to jet leg. As time went on however (he was here three weeks), I thought that he looked less and less well, and on his last day here I thought he looked terrible! That being said, things between us were fine, there were a few run-ins with my sons, but at least he has now met Charlie and seen his boys for the first time in three years. There's a whole other back story too, which I may or may not write about in time, but when I was talking to my sister this weekend and I went on a breathless rant for what seemed like about 30 minutes (but probably wasn't), I realized I  haven't done that since we split up! I guess it goes to show where my stress came from, right?

Jen's grandparents had come down for Charlie's birthday so one day we all took a trip into Geneva to visit the Natural History Museum (something Jen's grandparents enjoy very much, apparently). We spent a couple of hours in there, but to be honest when you see some of those sea creatures wouldn't it make you wonder why on earth you ever set foot in the ocean again! There was one exhibit which I can only describe as looking like a huge, fat squid and boy if I ever came across that in the ocean I think I would faint (although I expect the squid might feel the same way looking at me in a swimsuit)!

On my ex's last day we met up over at Jordan and Jen's place for lunch and then sat in the little park belonging to their apartment building waiting for Jordan to finish work. The babe explored his new surroundings, André played guitar and my ex pretty much slept for about three hours lying in the grass. Jen and I each had a bottle of Tourtel lemonade and at one point I looked over at Charlie only to see him playing with an empty bottle. What on earth the neighbours thought seeing us giving "beer" to him goodness only knows! 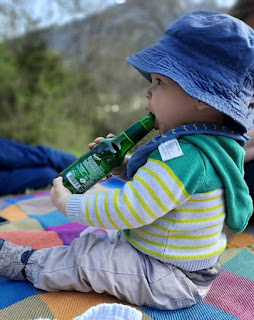 Other than that I've been pottering around and it's been quite satisfying to be slowly moving things forward in chunks of about a couple of hours work a day. André had given me a €100 gift card for a large garden centre near here so I headed out there one afternoon, fretting slightly because what if I didn't spend the whole €100? Would they give me a credit for the difference? Ha! What a joke! Since when could I not spend €100 in that place? I felt a bit daft at one point, though, because I've been looking for a watering can with a "daisy-thingy" spout for ages but could never find one. I mean, ages and yet while I was in the garden centre I picked up a whole bunch, looked inside one of them and there was the detachable head! Well of course, they put them inside the watering can so as not to lose them! I swear if I had half a brain I'd be dangerous!

Continuing on the gardening theme, I saw a youtube video claiming to show you "how to easily cultivate coriander (cilantro) seeds". Basically he soaked the seeds in water, crushed them slightly, wrapped them in cloth and put them away in a warm, dark place for three days. All well and good so far, of course, but do you think I can remember where I hid them? Nope, almost a week later I still haven't found them so I'm kinda waiting for yet another triffid to start making it's way along the shelves and out the door of some cupboard or other soon!
I'm not sure what's going on with the farm since the farmer died, but I was delighted to see the other day that there are now goats, sheep and about a dozen cows out in the fields behind me. But given that they have the whole mountainside to themselves, I can't help but wonder why the cows all huddle together in one spot! 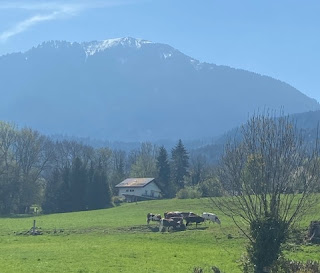 I was also delighted to see that our village is going to hold its first village fête in four years this year. They were doing some rebuilding work at the community hall for the first two years and then of course covid intervened, but I can only imagine how everyone will be looking forward to it this year. It is very rural, something akin to la France profonde, very sociable and it remains one of the most popular village fêtes around!

My friend and I went out to our first vide-grenier last week-end, both of us dreading buying more junk that we didn't need (we didn't), but it was so lovely to be out and about again after so long. It was gloriously sunny but by golly the wind was fierce on that plâteau so we stayed just long enough to have a wander and then hightailed it back to the warmth of the car! 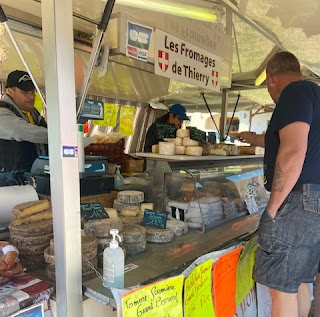 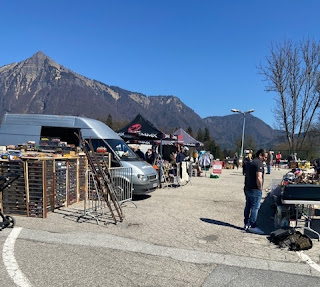 When I got back I was sitting watching my latest Netflix goodie (Anatomy of a Scandal) when the bloody phone went at 11.15 p.m.! I'm getting more and more of these telemarketers and I know it's randomized computer dialing, but do they really think they're going to get any money out of me at that time of night? I don't answer, of course, and they never leave a message, but still, time to unplug the landline at night, methinks!

And finally, I talked briefly over Easter with a friend who is going through a very unpleasant divorce. So unpleasant, in fact, that she found out he had placed what seems to be voice-activated recorders in her home - which is her home that she bought before marriage! Man oh man, there are so many ways you can be spied upon it's unreal. But that brings to mind a story on a site that I follow where one lady discovered that her soon-to-be-ex had placed a GPS tracking device in her car, after he'd run off with his mistress but before their divorce was finalized. So she got her own back on him (and probably drove him mad in the process) by getting her neighbour to place it in his car until the divorce was final. He was a travelling salesman!