André's car finally died a death last week. His dad had actually bought it new in 2009 and André bought it off him when dad moved back to the States in 2015. He loved that car but as he'd put quite a bit of money into it in 2021 I guess even he knew this latest breakdown was one too many. I think it's a 2009 Ford Mondeo Break but I'm not totally sure, and I don't really know the km on it because it had to have a totally new engine about seven years ago because his dad seemingly didn't believe in putting oil in it! Oh well, at least André got pleasure out of it for a few years. He called me middle of last week to say that he'd seen a car that he fancied on France's central database and what did I think of the price? Ha, as if I know anything about what constitutes a good deal! The only thing I told him is not to buy new because I reckon they depreciate about 10% as soon as you drive them off the lot! He told me that he had a zoom meeting with the bank on Friday to see about a loan and in the meantime I pulled up the bank's web page (we use the same bank), and without logging in I used their loan calculator to get a rough idea of how much he could expect to pay. Just to reiterate, I didn't log on to their site, I just used their calculator - as that's relevant to what happened a couple of days later. Anyway, the car he was interested in was in Valence (about 250 km from here) so I told him I would be happy to drive him down there on Saturday if he set an appointment up with the dealer. As the bank approved his loan on the Friday already, he needed to go there on Saturday morning to sign, so we agreed that I would pick him up and we'd head out straight after the bank. I got to his place around 9.30 a.m. and called to say I was outside. So he goes "so am I". Me: "no you're not, I'm by the entrance". Him: "yes I am and no you're not"! Say what? Turns out he'd sent me a text message (to which I'd replied "ok") saying that he'd come over to my place on his motorbike and we could leave from here. Ha, I was just about to get in the shower when he sent that message and didn't have my glasses on so I replied "ok" to us going together, but hadn't seen or been able to decipher the bit about him coming over here! Oh well, it worked out in the end, he signed the loan paperwork and by 10.30 we were heading out of my village. We'd only gone about 100 metres when my mobile went and although I don't usually answer to numbers I don't recognize, for some reason I stopped and picked this one up, and it was the bank saying that they'd seen I'd been looking at loan calculations yesterday and could they help? Say what? I hadn't logged on to their site and yet they still knew I'd been using their loan calculator! I've always known Big Brother is watching but I really never thought it was that bad! Seriously?

Traffic wasn't too bad considering it was a Saturday, and change-over day for the skiers, so when we got to within 50 km of Valence we pulled off at a motorway rest stop to get something to eat and boy was it crowded. André said he reckoned the restaurant should have asked for our vaccine passports but that place was heaving and they wouldn't have had a snowflake's chance in hell of scanning anyone's pass even if they'd wanted too - but nobody tried anyway! We must have been about 50 people lined up one on top of the other waiting to order, and maybe 200 people in there all in all - so much for social distancing right? Anyway, all's well that ends well, André fell in love with the car right there and then and in a few days we will be driving back down there to pick it up. So when I say he's just like me, I mean that we both make our minds up pretty much instantly. Heck he bought his apartment without even seeing it as it wasn't built yet - he just knew he liked the area and the floor plan, and look how well that worked out. And I'm the same, I knew instantly that I liked the house I'm in now, I can pick out shoes/clothes/glasses in about five seconds flat and pretty much tend to always go for the first thing that catches my eye anyway. Actually since I will hopefully be getting my bathrooms started soon (more on that in another post), I've been looking at tiling for the floor and walls and think I know what I'm going to buy already, after looking online for about 30 minutes!

What's more we had a really good time driving down there, yacking non-stop about anything and everything and it was great. I felt like I had lost my son to a certain extent at the end of my marriage because although it was my husband laying into me (hell, André would be the one dragging him off me most of the time), I think the fact that his dad would later burst into tears did a number on André and that was where I lost him. He told me once "you're strong and dad isn't" and while that's true, I felt it also cost me my relationship with my son as he felt he needed to "be there" for his dad. Thankfully that ended when my ex moved back to the States in 2015. Now, though, we have a great relationship and I'm really happy about that!

In fact just yesterday he called me to ask where I bought my tea bags as he had run out (the good quality ones we get in the UK, not the crappy Lipton stuff they drink over here). I told him where I buy them but also said he should be careful because if the Brits found out he'd let his stock of tea bags run out they might have to take his citizenship away! You can never be too careful these days! I usually buy them at the Chinese store up the road (they sell everything) and just pick them up when I see them (they're not always available), so I told him I would bring him some over on my way to the gym later. Well, when I got there, the weather was glorious and we ended up sitting on his balcony having a beer and putting the world to rights - as you do - so guess who didn't make it to the gym after all - yeah, me! 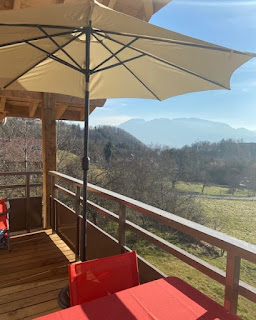 Talking of unwanted phone calls, I had a call on my mobile today from a Paris number. Like an idiot I picked it up and it was someone trying to get me to set up a monthly donation of €40 to Douleurs Sans Frontières (Pain Without Borders). I guess they're a bit like Doctors Without Borders but I'd never heard of them. Sadly I won't have anything to do with Doctors Without Borders since the day many years ago the then top guy (Bernard Kouchner) crashed his DWB-provided porsche!!!! He may well have co-founded a wonderful organisation, but I didn't like him much to begin with because he was forever falling to his knees "in distress" (great photo op) at some of the awful sites he visited and I just found him to be way too theatrical! Shame really, as I'm sure they do wonderful work! Anyway, I digress! As this bird was pushing very hard to get me to set up a monthly donation I told her that as I was sitting in front of my computer I was just going to look up how much their CEO's salary was and I would let her know. I didn't find it out, as it happens, but I told her I have my own preferred local charities (true) and was able to get her off the line eventually! Then tonight I got yet another bloody phone call on my landline at 8.45 p.m.!!! It's a number that routinely calls me without leaving a message, but seriously? They are calling at 8.45 p.m. and think they're going to get a good reaction?

And finally, poor Charlie has been sick again. Man oh man has that little boy been hammered during his first year! I know, of course, it's because of the day care but he really does seem to have been through the wringer. Jen managed to get an appointment with an out-of-hours doctor as she thought he had chickenpox, but it turned out to be hand, foot and mouth disease again! Say what? This was what he had when he was about five months old and was seriously miserable - much, much worse than covid, which he just sailed through. And we all thought it was a "one and done" but apparently not. Seeing where he got those blisters though (hands, feet, chin and mouth), it was quite obviously hand, foot and mouth again! I went over to help Jen out as the poor little guy was just miserable and wanted to be in someone's arms as much as possible - and then, two days later, he was over it again! The little boy next door also had it (same day care) so the neighbour was going through the same thing at the same time. Still, he's good now and as Tuesday was Carnaval (Mardi Gras) they asked the parents to dress the kids up. You know the character Where's Wally (in the UK), or Where's Waldo (in the US)? Well in France it's Where's Charlie so Jen's choice of outfit for the babe was a no-brainer! Not that he probably could care less, but I'm so glad he was well enough to go back to the crèche on Tuesday as they had a "special surprise" for all the children. And since we're all getting together as a family again on Sunday at Jordan and Jen's place for lunch and a board game afternoon, I'm sure there will be plenty of willing arms to spoil him rotten! 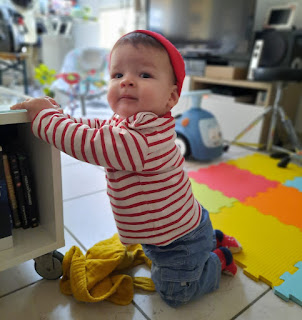