Here's me telling Ms Moon the other day how I routinely save posts regularly so I don't lose them, and blow me but I've just written a whole post, saved it repeatedly as I went along when damn we had a power surge and I lost the whole lot!  That'll teach me to be smug, I guess!

So what was I saying? Hmm, well not much has been going on here to be honest. We had a glorious week last week but this week is looking to be pretty cruddy weather-wise so I guess spring isn't here yet! Jen and her mom took Charlie swimming on Sunday and he absolutely adored it. Then it was back home to prepare a fondue as they had invited us all over for lunch, followed by a board game afternoon. Everyone reckoned Charlie would be out of it after his swimming date, but not a bit of it. He was tearing around "playing football" with his dad and his uncle (I have the sweetest video) until one minute he was there and the next minute he'd crashed!

While we were chatting Jen mentioned that Samuel had another race in Beijing that afternoon and while we watched out for him, sadly he didn't make it through to the finals. He's still something of a local celebrity over here and very much a winner in all our minds though! Then Jordan mentioned that Daniel, Samuel's younger brother, had switched rugby clubs recently. Jordan and Daniel had played rugby together since they were little but while Jordan dropped out eventually after one broken collarbone too many, Daniel kept going, proved himself to be pretty talented and has played professional rugby for about nine years now! Apparently he recently transferred from Toulon to premier league, Pau, and, would you believe it, their players earn between €25,000 and €45,000 per month! Yes, per month! And I'm delighted for him! I know a rugby career is not long, all the more so if they get injured, but I'm pretty sure Daniel has his head screwed soundly on his shoulders and will manage that money sensibly!

I see Macron was doing his statesman bit last week when he flew to Russia to see Putin - who promptly chewed him up and spat him out, as is his want! By all accounts Macron refused to take the Russian covid test, preferring to take one provided by his own doctor, so there were no handshakes, no photo ops sitting side-by-side, and they ended up "negotiating" over a table that wouldn't have been out of place in Buckingham Palace!

As I'm pretty much a late bird, I've been getting my money's worth out of my Amazon Prime and Netflix subscriptions lately. The other night I watched The Tinder Swindler, which was a documentary narrated by three rather beautiful young women who were conned out of a lot of money. They never got their money back but the Dutch lady at the end was rather funny and managed to get some small revenge on him, although after spending just a short time in prison for a con committed in Israel, he's now apparently back out running around doing whatever it is con artists do!

After that I watched The Puppet Master which, again, depicted the true life events inflicted by another fraudster on totally innocent (but maybe guillible?) young people. Set in the 1970s in England, he told them he was a British agent who had infiltrated the IRA (Irish Republican Army) but they were on to him so he/they needed to go on the run, holing up in "safe house" after "safe house". Why they felt the need to go on the run when they had done nothing wrong is beyond me, but I guess many of these fraudsters are so good at what they do that people lose all sense of reason! He would have them call family begging for money to "help him escape" and literally robbed them of thousands of ££££ and years of their lives. Sadly, he is also still at liberty, vehemently denying he ever did anything wrong!

Then last night I finally finished the second series of Succession, and I have to say it has grown on me, after a somewhat bumpy start. I had never heard of Brian Cox but he does a sterling job of playing the domineering family patriarch. I have more of a problem with the prodigal son as the camera seems to be forever panning in to him whispering, stuttering or walking round with a face that looks like a melted candle, but I'll stick with it and watch the third series! So you can see, I wasn't lying when I said there truly isn't much going on here right now! 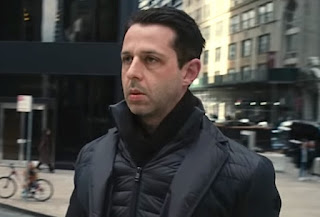 And fnally I reckon I'm in for an expensive few months. I had a guy come in last week about replacing the three velux windows that are going rotten and I know I have to get a couple of new tyres when I take my car back in to get my snow tyres taken off. Then I realized that I might need to think about ordering more heating fuel as I don't like to let the tank get to less than half full. Ouch, 1,300 litres at today's prices - yeah, ouch! I used to order fuel through a cooperative based out of CERN (the European Nuclear Research agency just across the lake from here - you know, home of the Hadron Collider), but they have closed down their office there so now I order direct from the fuel people, but (hopefully) they are still giving me CERN-cooperative prices. They just called to say that they would be delivering tomorrow morning from 7 a.m. onwards - yikes - so I told her I hoped the driver wouldn't mind letting himself in 'cos I'm pretty sure I'll still be in my pjs at that time of the morning! I guess I'm not used to early morning starts any more, what with all the late night TV I'm watching!