I don't know what's come over me lately but I've been as lazy as hell and I don't like it one bit! I just can't be arsed to do much of anything right now. Oh I cook because I need to eat, and I keep things tidy (enough) but when I consider how much time I have I'm amazed at how little I'm getting done at the moment. I mean, I bought the paint to repaint the bathroom unit (love the colour), but I've only been plodding along at the rate of about an hour a day. I never was one to knuckle down and "just get the damn thing done" anyway as I prefer to potter, but to take this long to empty and paint a single unit? Seriously???? My bad habit is to get up and start listening to the news/podcasts while eating breakfast - and then I go down that bloody rabbit hole and before I know it three hours have flown by. So I have to admit I felt like one of the Enigma code breakers at Bletchley Park the other day when I realized I could actually take the computer into the bathroom and listen to podcasts while I am painting!!! I know, it's genius isn't it! I don't know why I've been so lazy lately but I'm hoping I can shake myself out of it soon because there really is so much I could be getting on with. Or maybe it's just that I don't have enough to do. That's possible too. I always preferred it at work when I had tons to do because I believe you get lazy if you don't have enough to do, probably because in my case I'm not particularly driven! That being said, I went and picked up the new, not so exciting sinks for my bathroom and Jordan will come over and instal them when he gets a chance. Actually I wouldn't mind asking him if he wants me to start removing the tiling from around the bath before he takes that out. There's no hurry but the more I can do myself, the less he will have to do when the time comes!

For Christmas this year, Jen's mom's boyfriend very kindly bought us all tickets to visit Alta Lumina up at a place called Les Gets (pronounce "lay jay"). Well actually he had bought them for last year but what with covid lockdowns and curfews we couldn't go. So yesterday we made up for lost time and the six of us (plus Charlie) headed up to Les Gets for 5 p.m. Now Les Gets is at 2,000 metres above sea level (that's over 6,500 feet) and although the weather has been glorious it was obviously going to be pretty cold up there. It sure was - turns out it was -5°C (23°F) - so I knew I'd have to be careful about what to wear as the visit involved a 45 minute light show outside in the forest. Luckily I hit it just right as I had on really good quality boots and socks, a pair of my ex's old long johns and sweat pants, and then about five layers on top with a heavy duty winter jacket. And it was perfect! Not too hot, not too cold - so much so that I didn't even wear my hat and gloves. We all looked a bit like the Michelin Man, of course, and I'm pretty sure none of us could have blown our noses if we wanted to (because you can't bend your arm at the elbow), but it really was just perfect. I tell you though, with the starting point being at the bottom of a very mild slope, I puffed up that thing just enough to realize that I have to get back out and start walking again - I'm so out of shape! Oh there was heavy snow, I had on layers of clothing and it was uphill and ... - nah, I've got nothing - I'm just out of shape!

Jordan had Charlie strapped to his front, obviously all dressed up for the cold with a big blanket over the top and he loved it, although not enough to prevent him from falling asleep by the time we got to the end! 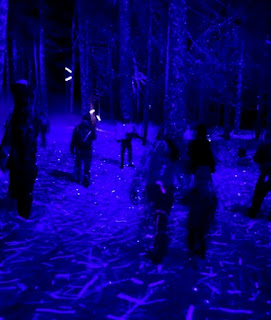 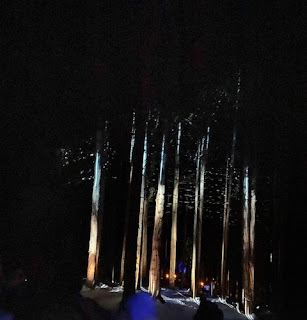 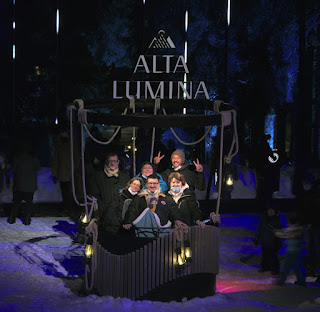 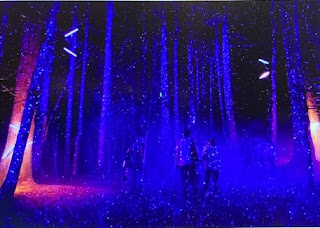 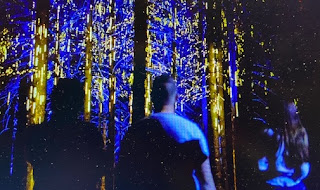 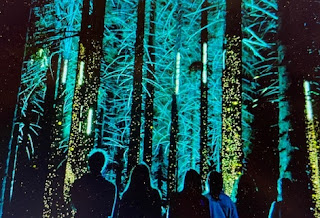 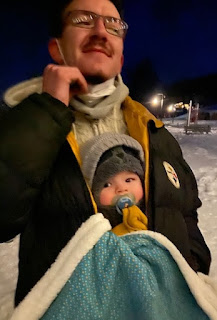 When we came out the sky was just spectacular (the photo doesn't do it justice). It was cold and clear and crisp and just so stunning - I wished I knew so much more about the stars. Jordan had an app on his phone so we were able to identify so much but it really is something I wish I knew more about! 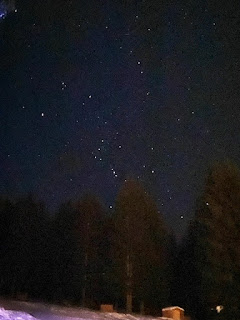 Afterwards we were all invited back to Jordan and Jen's (so they could put the baby to bed), Jen's mom had very kindly prepared tartiflette (my favourite meal),  and we ended up playing board games until just after midnight. I got home at 1 a.m. and went to bed at 3 a.m. Ha, there's life in the ol' girl yet!

And finally, Scarlet I popped over to your blog after you left a comment on here and am I ever pea green with envy at your talent! I wanted to leave a message but I see you have disabled comments. Either way, you are one very talented lady!