Life continues as normal as it can here in my little corner of France. Nothing exciting, but nothing dramatic either! I think I've totally thrown Facebook algorithms off by blocking them from my phone because I'm now getting bombarded by adverts to "reverse my bunions"! I guess it makes a change from trying to improve my status as a male bodybuilder, but since I don't have bunions I am at a bit of a loss!

I managed to get out in the garden to put my garden "to bed" these past few days and it has been lovely. The weather is glorious (25°C - just my kind of temperature), and cutting back the tomato plants and all the other foliage has really opened up space around here (does anyone else love the smell of tomato plants on their fingers or am I just weird?)! Last autumn I threw a bunch of stringy potatoes into one of my raised beds and believe it or not they have actually grown and seem to be harvesting themselves because every time I go out there, the soil is just glorious and I have a few - admittedly very small - potatoes sitting on top of the bed! Ah, simple joys. I wonder though if it was because I dumped all the mouldy grass clippings onto the raised beds that it made such a big difference to the quality of the soil! One of life's simple pleasures I guess!

Talking of gardening, my gardener showed up the other day to cut my lawn and I ended up chatting with him about cutting the hedges as and when it suited him. I also mentioned that I needed my damson bush cut back and the mirabel plum tree was looking very sad, so he is going to take the plum tree out (a shame as it was glorious) as it is really sick and he will do the necessary for the rest. So I'm thinking I'll have to get looking for some more trees to plant to replace the plum and the cherry trees he's taken out - as I hate an "empty" back garden! My neighbour asked me yesterday if I was responsible for cutting the island in front of our houses so I told him I had asked my gardener to cut it one day when he came with his ride-on mower and I would pay him! There's nothing like paying "the hired help" to get something done is there, but hey, I have no intention of doing it myself, so I feel like I'm doing my bit to keep the place tidy and my gardener sure as heck is glad of the money. Actually I sat with him after I offered him a coffee (my gardener, not my neighbour) and we ended up getting into French politics and boy was that an interesting discussion!

Next May we have the French presidential elections and I talked to both my neighbour and my gardener about what was going on there. While I know the pandemic will have been hard on any government to handle, Macron's authoritarianism has rubbed so many noses the wrong way - and yet I had so much hope for him when he was elected! So I was talking to my neighbour the other day about which way she thought the election might go and she was saying that while nobody wants to see Macron re-elected, the problem was that there seemed to be no viable opposition - and my gardener said the same thing! Macron basically ran against right wing Marine Le Pen last time and won but this time who knows. Not me, certainly. Oh I've seen the various politicians and understand their views as regards the pandemic, the vax passport and so on, but as to their general politics, I have no idea. We have François Asselineau, who I have appreciated very much during the pandemic. He has promised a vote on withdrawal from the EU (but for god's sake take a look at what a pig's ear that made of Britain) and NATO - but I liked him (not that I get a vote anywhere right now). Jean-Luc Melenchon - I have no idea but my neighbour says he is a nasty piece of work but talks a good talk (don't they all). But the most frightening to me is Eric Zemmour, who is more far right than Marine Le Pen! I had heard of him but only got to listen to him for the first time the other day - the racism just drips out of him like autumn rain on an oak tree. The problem is - he is very, very eloquent so damn! God knows we don't want any more Macron and his (former) relationship as Pfizer's banker, but who the hell do we have to replace him? (Try googling "qui est le banquier de Pfizer en France" - who is Pfizer's banker in France? - and see what pops up)!

Anyway, that's enough drama for today 'cos it's my birthday. Yeah, 63 and still raring to go! I went over to Jordan and Jen's today as Jordan works a half day on Fridays so I got to see my son as well as my sweetheart grandson on my birthday. I swear if that baby smiles any wider he will tear his lips! I can see that the Munchkin is about ready to try crawling - that bum goes up in the air but then he falls flat on his nose! So I got down on the floor opposite him and the two of us grunted our way towards crawling but he isn't there yet. As Jen said, at least she got her floor cleaned because grandma and babe covered most of the kitchen area on their bellies! While I was there Jordan showed me a bathroom sink that he was given from work to replace the one in their bathroom and a tap unit that would cost €400 if sold to the public that his boss told him to take if he wanted it for their bathroom renovation!!! I had mentioned to him about working on my bathrooms little by little because god knows they need it and he said that he had a couple of new sinks that I could use in my bathroom if I just went out and bought the tap units. So job done. I can wait for the rest, he can instal the sinks and taps as and when, I can pay him good money to do that, then repaint the units under them and have half a decent bathroom started! Yay me and yay him, because I feel I really need to push him to gain confidence and get started on doing plumbing on the side!

So that's about it for today at least. I met up yesterday with my dear American friend who I haven't seen for maybe four years because she was living in Ireland (more on that tomorrow). It was hard going because I find her so "broken", probably more mentally than physically, but I feel that somehow she's living her reality that is the US right now, despite the fact that she doesn't live there any more! I love her to bits and hate to see how fragile she has become. But, as I say, more on that tomorrow!

And again I see the terrible covid stats in north America and have a hard time comprehending it from over here. But just for comparison, I took this screen shot of official stats the other day to show just how different things are here! 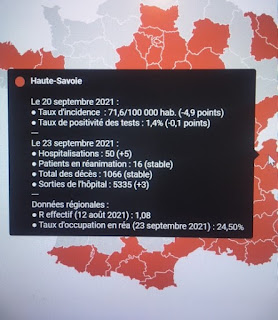 These are the official stats from the State of Haute Savoie as at 20 September.

Patients in ICU - 16 (stable - that includes all ICU patients, not just covid)

Total deaths - 1,066 (stable) - since the beginning of the pandemic. The last four months have shown maybe 10 deaths.

So of course I don't understand what's going on in north America and I can't relate. I hope you will see now why my reality is so very different from so many of yours. Either way, stay safe!