What the hell just happened!

Gosh I had so many things I was going to write about but I seem to have just gotten side-swiped!  I suppose I should start at the beginning though right. I have, once again, decided that I really should try to lose some weight. I know, I know, I've said it all before but this time I really can't seem to come up with any valid excuse why not. I have the time to read, to cook and to exercise, so as I can't think of any other excuses here we go again. I have signed up to several dieting websites over the years which I'm sure work but the problem is … you have to follow them, and I have a real hard time being "told" what I can and can't eat. I think, more importantly, I read up on these diets and think "oh that sounds right" and then another one completely contradicts what the first one said and I end up being so totally confused as to what to believe! In the past I have signed up to Weight Watchers online (twice I think) and also attended their meetings (also on two different occasions), but firstly it was hell trying to get to the meetings because of the traffic round here and, as usual, I always have big problems sticking to a "plan". I have no doubt that they work but, as I said, I really don't like being "told" what to do! I have (briefly) tried the Dukan diet (I lasted three days), Slimming World online (they don't have meetings here) and was looking into keto but I hadn't got past the "oh I think I could do that" stage! Anyway, while I was in England the other week a neighbour of my sister's walked past and was chatting away with my sister and her husband and he commented on how he had already lost one stone (14lbs) with Slimming World and it was "fantastic". My sister got to chatting with him and afterwards was telling me that, yes, it really was a great system and so many friends had lost weight easily with it. OK quite a few had put weight back on too but that was because they didn't stick to the principles of SW. So when I got back from the funeral I thought "sod it", I'll sign up online again and see how it goes. I guess the only difference is I now have time to look through their recipes and try to follow it that way rather than looking through my store cupboard and trying to adapt their principles to my store cupboard - although I'm sure that's also possible. So I started SW online last week and have lost 2 lbs this week. That in itself is OK but in reality I can lose or gain 3-4 lbs overnight (hormones I guess) so I want to wait until next week to see if I think this will work for me. The big thing in their favour, as far as I'm concerned, is that I can eat fruit, and with the other plans I was just not willing to give up my fruit ration! Yeah, yeah, I know fruit is nature's candy but I still wasn't willing to give it up.

Anyhoo, all that to say, I have also been making an effort to get out and walk in this glorious weather we have going here. As my car needed some work after failing it's MOT last week I drove into town yesterday to drop it off then slugged my way back up home (I live at 800 metres) afterwards. Not too bad but it is hard work. Then, when it was time to pick it up, I walked back into town again so I managed over 13,000 steps yesterday. Today I had a bit of running around to do and when I got back I hesitated over whether I wanted to go out walking again but in the end I thought "sod it, put your money where your mouth is and get out there"! The weather is glorious, bright sunshine and around 14°C (57°F) so I decided at the last minute to head out for a walk up behind our houses before the sun started to go down. I have mentioned this walk before when I posted a picture of the pretty chalet and where I stopped to talk to the horses. 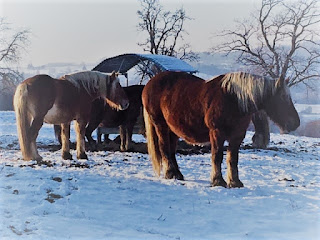 They were out again today (minus the snow), so I had a good excuse to stop and catch my breath (read "prevent myself from regurgitating a lung") so I went over and started talking to them. There was a man there a little further up with his "Savoyard" hat on (like a French cowboy hat) - they wear them a lot round here up in the mountains - and he wandered over and started chatting to me. I recognized him immediately as the owner of the farm up at the back of my house (you can see where his fields start in my header picture) and asked if they were his. They were, and he was explaining to me that they were females and one had just had twins - he said he misjudged her due date by two days so had taken her inside with her foals. So that's when I told him I recognized him and he was "Dédé A", or "André A", my neighbour. Now I have been friends with his sister for years, our kids grew up together, her only child being killed eight years ago in a car crash involving four kids from our little village. Two of the boys were killed in fact, and V, the mother of Hugo, the other boy who was killed, is one of the (founding) members of our board game evening and we are still friends. The other two kids in the car were M, the driver, who was badly injured, and C, Stan's daughter, who was also seriously injured but survived. So yes, I knew Dédé, but not well. Problem was, his sister couldn't stand him, said he was a "brute" ("a savage", I guess, in French) and they have nothing to do with each other. That being said, he did go to her son's funeral and stand at the back of the church so she at least realized that there was a heart there!

Anyway, as I got chatting to Dédé he asked me if I would like for him to show me round his farm and have a coffee with him. I didn't really know what to say so ended up saying yes. What I didn't know was that his wife had died in August and he was alone!  But like I say, I knew this man vaguely so off we went in his jeep further up the mountain to his farmhouse. Here he showed me his sheep and lambs (80 in total) and his Pyreneen mountain dogs that take care of them. A couple of years ago I did a post about how lovely it was to see the sheep and their dog/guardian in the field behind me. Then he took me over to see the goats. I just loved that shed as those goats were so pretty. Apparently he has 800 animals in all, but was telling me how lonely he had been since his wife had died. Anyway, we ended up having a coffee at his place and he asked me out!!!!! I said "but you don't know me, or at least only slightly", and he said he didn't care but did I want to go out with him!!!! Oh crikey. I said thank you but no I am very happy alone and not looking but I understood that he was lonely. Don't get me wrong, he was an absolute gentleman, but I have a hard time reconciling this man who was very good company and an absolute treasure-trove of information about local customs and the local landscape with the "brute" that his sister describes. I tend to believe her as he can be more than a bit "rough around the edges" but then I guess that is the nature of alpine farmers isn't it!

So we got chatting and he was asking me about my ex. I told him that many moons ago he had bought his tractor into our garden to take out a hazelnut tree for us (we couldn't dig the roots up) and he said "oh yeah, your husband had the baseball cap on" (well he is American). Then I explained that when Jordan was around 10 he and two friends had been up on the farm and thrown stones into the bath tub that served as a drinking trough for his cattle and that he had balled them out. So he said "so that's why you don't want to go out with me - because I balled your kids out"? So I said "no, Stan and I actually sent our kids back up to your place to apologize" (which they did - but he terrified them) and he remembered them. Shotgun in hand he yelled at them "je ne viens pas vous emmerder chez vous, ne venez pas m'emmerder chez moi", which basically means I don't "f...k around at your place so don't come f....ing around at mine"! He just laughed when I told him how scared the kids had been, but you know what, I don't blame him for balling them out because a farmer has a living to make and his animals are more than precious to him.

Anyway, after the coffee he got out the "niol" alcohol - homemade - and explained to me that it is made from a mountain plant called isopline (in English), where he went looking for it and how he made it. If you're interested - 40 isopline plants, 40 sugar cubes, cover with niol and leave for 40 days - easy right!

It is quite common here to have an alcohol "chaser" after a cup of coffee and I really was fascinated by all that he knows about the local area and its traditions. Under other circumstances he would be a dream man (for me) but I still wasn't interested in going out with him!!! Crikey, I only stopped to pat the horses! But you know what, I don't regret going for a coffee with a lonely widower - I just hope he knows to respect my boundaries and not show the "brute" side! So there you have it - a "brute" of an alpine farmer who invited me for coffee (and niol) and all I was trying to do was lose some weight! I told him up front I wasn't interested and was trying, kindly, to tell him that there were loads of women out there who would jump at the chance to date him. I did, however, say I would gladly have coffee with him occasionally - but the look on my neighbours' faces when man mountain/the "brute" dropped me off at my front door was a sight to behold!