It took me over three blo*"*"*dy hours to get to work this morning!

I called my brother for a chat yesterday as I hadn't spoken to him in a while and he was asking when I planned to retire. I told him (as I say so often) maximum another three years but preferably before as though work is fine the bloody commute is killing me, and lo and behold, where man makes plans God just laughs! Though it snowed pretty much all weekend the roads were ok when I got up this morning. I heard the plough come through our little neighbourhood at 7 a.m. just as I was getting ready to leave, and although you had to go carefully, it really was ok driving. Well, that is until I hit the motorway and the tailback was massive. In retrospect, it had nothing to do with the state of the roads but more to do with a couple of accidents in Geneva. I mean, the traffic was backed up the 20-odd kilometres of motorway from the border (that took me two hours to navigate) and then over another hour to cross Geneva, where a couple of accidents had pretty much brought the city to a halt! Still, at this point, I am pretty zen about it, I was on the bus with a good book and figure I'll get there when I get there. But like I say, all it takes is one idiot not to put snow tyres on (and there are loads of them about) and the whole city comes to a standstill!

Anyway, I eventually made it and will finish up what work I can do before heading back home, although the snow has now stopped so fingers crossed.

I had a lovely weekend though. On Saturday "Père Noel" was scheduled to do a practice run to my little village. As my kids are grown it has been ages since I went to meet Santa but decided that this time I would go and it was lovely. I have to say, the Sanfys (the local community group that organizes this kind of thing) does a wonderful job. In fact, I had volunteered to participate in this group (time permitting of course as I am one of the few still working) but I guess they lost my details or something because I never heard from them! Oh well, next year maybe!

Anyway, the weather was dry but not sunny when Père Noel showed up on his practice run, only Rudolph and the team must have been having a rest as he showed up in an old red and white Citroen Diane. 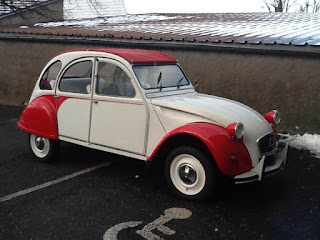 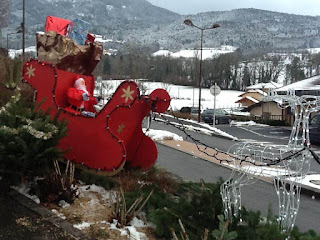 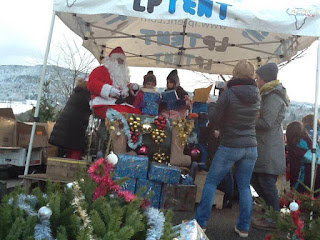 It was very well done and there were loads of kids and parents from our little village waiting patiently. The Sanfys had organized all the presents plus drinks, chocolates and brioche and an organ grinder (without the monkey) at the drinks stand and were walking round handing out huge glasses of mulled wine to the adults. I tell ya, you daren't have a partially-filled glass because before you knew it it was filled back up again! I have to say though, that not all mulled wine is good but this really was very tasty - or maybe it was just all that standing about in the cold that made it taste good!

An added bonus is that just as Père Noel was getting ready to leave, one of the local farmers decided to move his flock of sheep so the whole village road was blocked off while they were herded further down the road! If they had wanted to add a bit of "reality" to the event they couldn't have done better.

And finally, I ended up chatting to Steve this weekend after a couple of weeks absence. It has been a while as Mr. S is a party animal and has seemingly been busy partying. Anyway, we had a good long chat and he sent me the following video (which from the sounds of it was filmed in either Italy or Spain). It is pure magic. Steve hadn't realized it wasn't three men (new glasses anyone?) until I pointed out that no, it was in fact one man and two dummies - so three dummies then! Enjoy!