It's a different world out there!

Oh my goodness, haven't times changed! Or maybe they haven't, it's just that the place and circumstances changed. Ya see, when I was a kid growing up in central Birmingham (UK), our idea of a holiday was a day trip to Stratford-on-Avon for my dad to go fishing. Admittedly, times and finances have moved on since then, but last night really brought home to me what a little bubble Geneva really is. I'm not saying it's bad or good, it's just so different.

For a start, there is a lot of money here. Of course there are people who don't make a lot of money too but there is also very, very obvious wealth. When I was a kid, during my first year of high school, they were organizing a one-week camping holiday to Crackington Haven in Cornwall (lovely spot by the way). 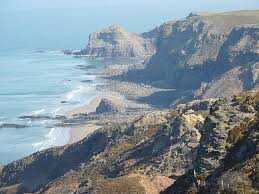 Our nutty (but extremely effective) English teacher had an antiquated old school bus that he used to drive us kids down there for the week. God alone knows how he got that thing (think large sardine can on wheels) down the tiny Cornish roads but somehow he did. And of course "camping" was probably a posh word for what we did. In reality we just had a bunch of maybe ten small tents pitched in a field, no washing facilities, primus stoves for cooking and the loo was a field's walk away. Yes we were expected to wash and brush our teeth in the stream which, as you can imagine, turned into a very perfunctory job because of how bloody cold the water was. Still, we had a great time even if the "facilities" were somewhat rudimentary (I mean, we were all working class kids and didn't really know "posh"). Every night one tent made dinner and another made desert and this being England it was actually cold enough in August for the huge desert dish of jelly to set outside! One night I remember eating my "desert" when I commented to my friend that I didn't like the peach slices much, to which she replied "what peach slices?" I looked down at my bowl of jelly and there was half a slug staring back up at me - I had eaten the other half!
Now being of a "sensitive disposition" I immediately wanted to chuck up, but also, having some manners, decided I couldn't possibly do it in front of my class mates (in the middle of a field - why not?), so ran all the way across two fields to throw up in the "facilities" (read "bog" kindly provided by the farmer). Yuck, but then I suppose it didn't kill me and indeed I have very fond memories of that, and other such holidays (with the exception of "meeting" Sylvester the Slug)!

One place that really did impress me was the Witches' Museum in Boscastle, where we got to see not only the horrific details of the torture meted out to so-called witches years ago, but just happened to be there during a freak evening tide, which was really spooky! 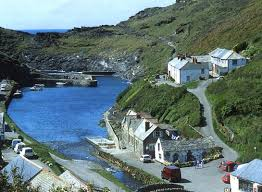 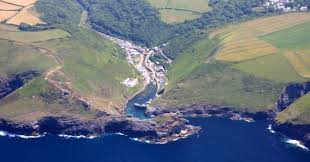 But you know, none of us had any money and something as simple as a week's camping like this was such a treat. And, something I really appreciate now, after we had packed our tents up we were made to spread out in a single line and walk the full length of the field picking up any litter - so you see we left the place cleaner than we found it. And that is the way it should be don't you think.

Compare that to this. Last night, as I was leaving to catch my bus, I saw my friend having a drink and he called me over. I couldn't stay for long as I had to meet up with a tradesman who was coming to give me a quote, but I sat with him for a short while. Eventually another friend joined us and we got talking about holidays.  When I mentioned that I was going to Mykonos and Santorini in September she said "Oh my son is there right now. A whole gang of them go every year when school is out - it has become something of a tradition"!

Don't get me wrong, she is a very lovely person indeed, but her son is 18 - and this is what his "holiday with the mates" looks like!  She is Spanish by the way, not Greek, otherwise he could well have been going to visit family, I suppose. But her kids, like mine, were lucky enough to go to one of the international schools here, and there you see wealth by the shedload! Many families (like hers and mine) work but are lucky enough to get financial assistance from their employer.  Others, though, are just loaded and for them this is nothing out of the ordinary! I mean, how come I get to eat slugs and they get to party in Mykonos? Not jealous at all, it's just that it really brings home how my life and circumstances have moved on. In fact, many years ago, when my oldest was still at school, one of the parents rented an apartment in Verbier for her kid to invite his friends to go skiing! I mean, my kid got to go skiing in Verbier, Switzerland!!!  Good Lord, I've never been skiing in Verbier! To be fair, the lads were great though, and as soon as they arrived they moved everything that could be broken into a cupboard and, I am told, left the place absolutely spotless. So credit where credit is due I suppose. In fact, my ex used to throw New Year's parties at the (isolated) farmhouse he rented after he left me and while I insisted everyone slept over rather than got behind the wheel, they partied all night and then all pulled together to clean up afterwards (Sonya Anne - there's an idea for you after your 4th of July party!), so fair play to them.

On a totally different note, yesterday I got the wonderful news that my son had passed his final exams in plumbing after a two-year apprenticeship. I am so thrilled for him. He is going to continue another two-years of study to take further exams but at least he has got that under his belt. When I sent him a message to congratulate him he wrote back saying "thanks, and thank you for everything"!  Oh, I want to cry.  Weird how that's all it takes isn't it - a bit of recognition!

And moving seamlessly on, this weekend my lawnmower started going on the blink (probably needs an overhaul) and as it was so hot I got really, really sick to the back teeth of the idea of ever cutting my grass again! I had been talking to my neighbours, who feel the same way as I do about their lawn, so I called the guy who comes once a year to cut my hedges. The upshot is that we have both set up an agreement with him to cut our lawns in future. So that's one thing less to worry about. I don't have a lot to cut but I hate the heat and end up looking like a lobster so while I don't mind doing the rest of the gardening (slug chasing ha, ha - payback time you bastards), he will now do the grunt work. And in fact he isn't asking as much as I was expecting so it's win-win all round as I sense he needs the work. So now I feel like Lady Mary in Downton Abbey - having to manage my "staff".  Posh isn't the word for it!

And how about Nigel Farage resigning! Whatever his reasons it seems like all those that orchestrated the "out" vote for Britain are now like the proverbial rats leaving the sinking ship. As far as I am concerned let the two ladies run the country (May and Leadsome could make a good team, IMHO) - I'm sure they can't screw things up any more than the pillocks who just crawled back under their rocks now the real work has to be done. Oh and last one out, put the light out will you!

So on that note, I will love you and leave you. For Anne (New Happenings at the Table), I did weigh myself on Monday as promised and you know what, whether I weigh myself in lb, kg or stones, it still don't get any better! Bloody awful in fact. But at least yesterday I was good and hopped off the bus on the Mont Blanc bridge to walk the 30 minutes to work and went to the gym at lunchtime (hee, hee, I hear you snigger - we'll see how long that lasts)!  So back for the weigh-in next Monday then! And good luck!