International cooperation at its best!

This weekend I took a bus trip down to Turin to visit the market. We had done it last year and thoroughly enjoyed it, so even though it meant getting up at the crack of dawn it was something we wanted to do again. It is has been pretty much non-stop for me since last week so I must admit I was completely Christmas-crackered ("knackered" in Cockney rhyming slang) after last week.

Work has been frantic, but always is at this time of year. I don't mind actually but it does seem to be a feast or a famine sometimes. One of my sewing clubs had kindly moved their end of year get-together from Saturday to Friday night so that I could be there, and although I was a bit worried I might end up missing it because of working late, I actually made it to our rendez-vous point just in time to meet up with the others.

One of the great things about these ladies is that they always seem to pick out a new-to-me restaurant that ends up being a little treasure. We ended up very close to where my son lives in a small village called St. Jean de Tholome, eating at what you could, I guess, technically call a "burger joint", but in reality it was superb.

The food was excellent and very reasonably priced and the staff really friendly. Now I know why you have to reserve (well we were 12 anyway but apparently it is hard to get a table if you haven't called ahead). 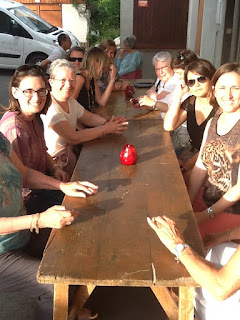 After dinner some of the ladies decided to go out for a drink but I begged off as it was already 12.30 and I had to be up at 4.30 to get the bus to Turin.  I have to admit getting up at the crack of dawn didn't exactly thrill me, but as long as no-one spoke to me for the first hour it was doable and heading up through Chamonix to get to the Mont Blanc tunnel was a dream. And of course I didn't regret it. While black clouds threatened everything turned out just fine. The market was again wonderful and I really love all the hustle and bustle. Geneva is lovely and pristine, but I have to say it lacks that vibrant buzz that you get in Italy!


Yet again the fruit and veg were just amazing and so tasty compared to the plastic rubbish you often find here, and at least half-price, or maybe even one-third of our local prices. When I asked one of the ladies why this should be she said the Italian producers weren't taxed like the French were (though that didn't explain why things should taste so much better in Italy, particularly given that we are on pretty much the same latitude! Go figure). 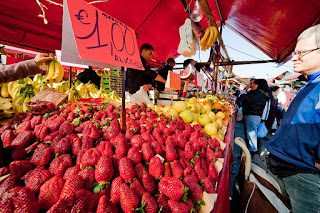 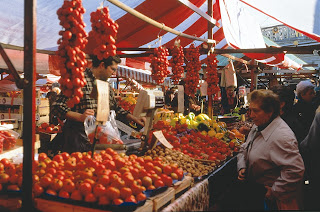 I also bought myself a very nice, "really expensive" (not) handbag and a lovely throw for my bed for the grand total of 20€! 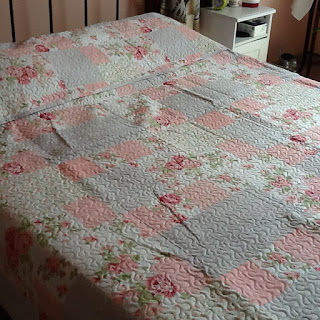 Lunch in the centre of the market place was again fabulous (spaghetti carbonara à l'italienne anyone)! While we were eating, a group of young schoolgirls started taking photos with a selfie stick (I'm thinking they were probably from an international school as they were speaking English and French). Just as they were about to take the last photo an Italian pizzaolo ran up to them, jumped in the air and got right into the middle of their shot. I bet it turned out to be the best photo they took!

We were told to be back at the bus by 3 pm but one group of ladies came back very distressed. They were a group of four sisters (I think) and one great-granddaughter out for a day's shopping, but right at the last minute they had lost track of the oldest sister, aged 86. Being that age, of course, she didn't have a mobile phone and they were worried sick. Now I know people say to watch them like a hawk, but just as with kids all it took was one moment's inattention and she was gone. The market would have been pretty confusing for her anyway I guess. We waited until 3.30 pm and in the end the trip organizer arranged with another coach heading back to France a couple of hours later to bring them back if and when .... trouble was, "when" didn't happen. In the end two of the sisters stayed back in Turin to look for "mamie" and the other sister brought the young girl home.  What a nightmare - they were absolutely frantic.

On the way back, before reaching the border, the coach stopped at a big hypermarket so that people could do more shopping. According to one lady, bottles of spirits, for example, would be about €10 per bottle cheaper in Italy, as would cigarettes etc. so a lot of French routinely cross the border to stock up as it is cheaper than France - even taking into account the toll to get through the Mont Blanc tunnel (a feat of engineering indeed - 11.5 km of road hacked out under the Mont Blanc)!

But something to think about is this. Put that shopping in the context of "Brexit" and swap "Turin" for "Calais" or "Cherbourg" and you can get some idea of the kind of impact Brexit will probably have on the French economy. Brits routinely hop over to France on a day trip to fill the car up with French products but if, after Brexit, the Brits are again limited to two bottles of wine, 200 cigarettes and €100 of other goods, what will that knock-on effect be for the local French hypermarket?  Tough times ahead, I think.

I bought some mozzarella and parmesan cheeses and a little olive oil but other than that not too much at the hypermarket.

Anyway, when we got back to France, the coach started dropping people off, including the sister of the lost "mamie", who had to get all the other sisters' stuff off the coach, in addition to her own. My friend and I were the last two people off the coach at the final stop, so the driver and his young helper offloaded our stuff and headed back to the depot. Trouble is, when we had finished loading up my car we found we had ended up with two extra bags! Obviously someone had forgotten them on the coach. So when I got home, I put what I could in the fridge and called the organizer. He said if someone called him he would give them my number but otherwise, I guess, I should take it as a windfall, since I couldn't hang on to the perishables too long.

Next day, however, I got a phone call from the owner of the missing bags. She then put me on to her son-in-law and we arranged for him to come over and pick up the bags (which included clothes and shoe shopping in addition to the groceries). On the off chance I asked him if he was related to the mamie who had gotten lost and he said yes - that is why his wife had missed some of the bags on the coach. It turns out that mamie had wandered off and got completely lost. She had been found by an Italian policeman in the backstreets of Turin. Said policeman, who didn't speak a word of French, managed to collar a French lady, who didn't speak a word of Italian but who took pity on the older lady, brought her back to her own bus and the driver took her back to France with them. Trouble was, this bus ended up back at a town called Aix-les-Bains, about 70 km away. Mamie had been so distressed that she couldn't remember her own phone number but the Good Samaritan went through the phone directory and eventually managed to track the family down.

So in the end it all worked out. A kindly Italian policeman found a French Good Samaritan to bring the distressed older French lady back and an honest Brit returned the unclaimed bags to them, via her lovely French neighbours who agreed to stay in to hand over the bags to the son-in-law (I hope you are following this). I tell you, I think we should just kick out those idiots in Brussels and let the proletariat run the show - I think we would do a better job don't you!

Talking of Brexit, I went to bed Wednesday night thinking it would be a close call but we would remain in the EU. I got the shock of my life the next morning to hear they had voted "out". I say "they" deliberately as I was really, really angry that I wasn't allowed to vote because of the arbitrary decision to exclude expats who had lived outside the country for more than 15 years. Bloody hell, as someone most closely affected by the damn vote I was spitting cobs at the thought of not being able to vote on an issue which could see me getting kicked out of France! In all honesty, I don't see that happening but I really, really resented not being allowed to vote on an issue that affected me 100%. I have calmed down now, and while I would indeed have voted to remain in the EU given the chance, I think the fact that the UK has voted out is a good kick in the teeth for the complacent, arrogant dictators in Brussels - let's hope it is the wake-up call they need, or maybe other countries will follow suit.

I intend to start the process of reverting to my maiden name after my holiday in September. Once my British passport is updated my son and I will begin taking the necessary steps to become naturalized French citizens. I will go ahead regardless of how events unfold after Brexit as whatever happens I intend to stay here when I retire.

Anyhoo, moving seamlessly on, on Sunday we had our annual "neighbours day", where we basically spend a couple of hours cleaning up our "lotissement" (housing plan, I guess) and then have a pot luck lunch together. Again we were lucky in that the weather was nice, and I have to admit our little lotissement really does look nice once it is all squared away - not that it ever really looks bad as people do seem to take care of it. 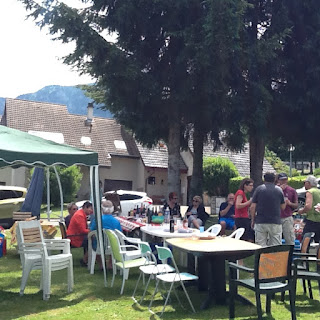 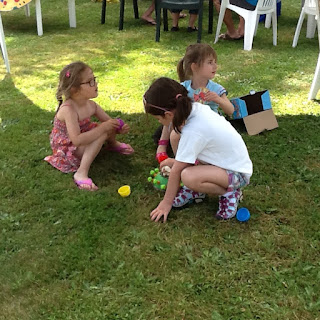 It's a nice lotissement to live in. The people are friendly and seem to look out for each other. There may be tensions occasionally of course, but as I am on my own I feel very secure in this friendly little French enclave. Brexit be damned!