There's not much new going on here at the moment, except for my being frantically busy and us getting yet more rain. I swear the rain has been on and off for six weeks - I'm kinda getting fed up of it now, I have to admit, even though I don't actually mind the rain. As for the "frantically busy" bit, well that is just the current work cycle. I prepare two large meetings a year (July and December) and four big reports (two for each meeting). Not that I actually write the reports - we have eggheads to do that - I just put it all together ready for translation/publication. So at this time of year it is pretty busy - not that I am complaining - I like to be busy and you do get a sense of achievement when the bl***dy things are published.

Traffic is pretty bad (or maybe even getting worse) here in Geneva, what with the ongoing works to build the CEVA (the train that will link the local French area with the central train station in Geneva, thereby (hopefully) cutting down on thru-traffic in the city centre. Can't wait for that to go through, of course, but I fear it will probably be too late for me as I will, hopefully, be retired by the time that is completed.

On top of that, the Swiss have just voted yes to building a bridge over Lake Geneva, also with the aim of easing traffic through the city, but this time I know it will be too late for me work-wise, though it should eventually have a positive impact on the city nevertheless. Geneva is, of course, stunningly beautiful but since it is located at the end of the lake, pretty much all the traffic wanting to get from the south bank to the north bank of the lake (i.e. ME) has to go across the Mont Blanc bridge, and that is a nightmare! 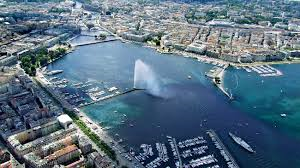 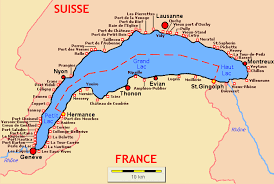 I come in from France (to the south), and although I park at the border and catch the bus, I still spend at least 40 minutes each way on the bus to get over the lake. It is what it is, I suppose, and I (like everyone else) just have to put up with it.  It's worse in the winter of course or if there is an accident, but at least catching the bus allows me to get tons of reading done, which I would do anyway, so I'm thinking positive here.

Which leads me to my next point. I was recently on the bus reading a local French magazine and an article on a new French law aimed at stopping food waste. I'm pretty sure this has already gone through, though I don't know the exact date. Under this law (and I am paraphrasing here) all grocery stores/supermarkets over 400 square metres in size have one year to come to an agreement with a local entity whereby any food near its sell-by date which they would otherwise throw out will be donated to that entity. Presumably a local charity or food bank.  Moreover, they are no longer allowed to pour bleach over it in the trash cans to render it unusable!

I think this is a wonderful initiative, aimed at reducing food waste and helping out local food banks etc. in the process.

Every week when I go shopping I pick up a couple of extra items of food, and when I have a box full I take it down to the local food bank. It is run by the Red Cross, who do a wonderful job with limited resources. They know me now and took me round their storage unit last time I was there. I have to admit it is pretty small and depending on the time of year they can come quite close to running out of supplies, since they are only allowed to collect outside the supermarkets once or twice a year. These people soldier on, however, and I have nothing but admiration for them.

Since I got landed with a bunch of my ex' stuff when he upped sticks, I asked them last time if they needed clothing and it turns out they are indeed happy to take that too. They work with the local psychiatric hospital and were particularly keen to get hold of men's coats over the winter - men, it seems, being more likely than women to end up homeless and in dire need of warm outer clothing. I have been able to give them eight coats so far, which must be a win-win situation for everyone!

Anyway, I think the French are to be commended for this initiative and can only hope that the UK and others will follow suit. In fact, in his recent programme on supermarket waste, the wonderful Hugh Fearnley Whittingstall went out one night "dumpster diving" with volunteers from a local soup kitchen, taking perfectly good food from supermarket bins that was being thrown away and lugging it back to the soup kitchens to make into dinner for those in need. The young man said that he had once been placed in the back of a police car and had begged the supermarket to file a complaint and the police to arrest him - but of course the supermarket wouldn't because of the bad press it would generate. Good on him, and good on France - let's hope it catches on!