And even busier - thanks for nothing!!!!

I held off from posting about this for a while as I didn't want to post while my blood was at boiling point.  I thought somehow I might come over as a "hysterical woman" and have my rant put down to the "time of life".  Anyway, now that I am calmer, what do you think of this?

In 2010, my f****-wit ex husband (let's call him P) stopped coming home in the evenings right after Christmas.  Not that I cared frankly because he was usually down town in one of those bars you see in Westerns where they all come crashing out through the windows at closing time (I mean, where-oh-where is John Wayne when you need him?).  Anyway mid-February 2010 he came home all dramatic and announced that he had something to tell me.  He had moved in with B (another bar habituée) and he would be filing for divorce.  (I tell you, I had to nail my feet to the floor to prevent myself from leaping ecstatically into the air - that would only provoke the little man).  So long story short, he moved out.  Then 3 weeks later he moved back in.  Then 2 days later moved out ..... can you see a pattern here?  Frankly she was/is as pathetic as him so every couple of weeks they would have a spat and he would move back in "cos it's still half my house".  Honestly, they were the worst months of my life, worse even than when he lived here full-time.  (I remember coming home from a lovely evening at the theatre one time and finding 2 suitcases AND A BLOODY GOLDFISH in the dining area - that was when I sat down and cried - sorely tempted to flush the goldfish down the loo - but I didn't!!)

Anyway, eventually I  filed for divorce and it was finally granted but only after I agreed to take on all the debts AND pay his share of the notary's fees for him to allow me to buy him out of the house AND pay his lawyer's fees - for the divorce AND for his (latest) drink-driving case that was also going on.  Generous of him wasn't it - because if I didn't agree to it he was no longer going to sign the divorce papers.  And to think he goes round telling everyone how he gave me the house!

So, moving seamlessly on, eventually Tweedledum and Tweedledee split up after she cheated on him with a "friend".  Then obviously he is devastated because there are obviously no more women in France and he hated being on his own.  SHAAAAME!

Fast-forward a few years and I am deliriously happily divorced and he gets back in touch with an old friend from the US.  Oh, back up a bit.  In January of this year he gets himself what, according to my kids, is the sweetest dog.  Fast forward again and the new/old friend comes over from the States for three months and has a whale of a time with him throwing money around like it's going out of fashion (good job he didn't have to pay any lawyer's fees/notary's fees eh?)

So then I get a phone call two Sundays ago asking if the kids had told me he was going to the States, so I said "yes in August to see your mom".  So he goes "no, this Friday and I'm leaving definitively"!  To make an ever-longer story shorter, he and the new gf (of three months) are buying a place together in the States.  When I asked about the dog he asked if I wanted it!!!! I told him if I had wanted one I would have gotten one, but since I am absent at work 12 hours a day I wisely didn't want one thank you very much.  So the poor dog gets shunted back to the dog's home and - get this - while he has given  notice on the 3-bedroomed farmhouse he was renting he hasn't emptied it "in case the kids want anything".  He just buggered off to the States on the Friday and left the house "as is".  I mean, he didn't even do the washing-up!

I was furious.  I have enough to do without emptying out his shit and taking his rubbish to the tip.  And as for the garden, for a man who is retired and the garden consists of 5 rose bushes ONLY (I kid you not) I have never seen such a jungle which will take a good few hours to put right.

Now I know you might think it's not my problem - which it isn't - but here in France responsibility for debts etc. goes on down the family line as far as the grandchildren so I don't want my kids to get into any hassle over this.  Add to that they can indeed take some of his stuff if they want it.  The rest, I will clean up and sell (thanks for the suggestion Sonya-Ann) but do I really, really want all this extra work right now?  I think not - but then again, if the good Lord now sees fit to put an ocean between me and him, maybe it will be worth it!!!

Oh, and where are Steptoe and Son when you need them most? 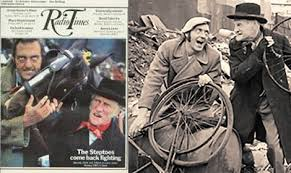 And you know what, this might seem like a bitter rant (I hope not) but it feels so good to write this down and see if other people think (a) I am just a bitter ex-wife (NOOOOOO), or (b) he has a few screws missing.